Intralinks was the lead strategic partner at, and sponsor of, the awards and had an integral role in the evening with Fred Mather, EVP, Global Sales, presenting eight awards in total including M&A Deal of the Year.

The M&A world has experienced a challenging 2009. However, there has also been notable examples of exceptional deal making so what better forum to celebrate the successes than at the Financial Times and mergermarket European M&A Awards 2009 at the Sheraton Park Lane Hotel in London. This was the third annual award ceremony hosted by the Financial Times and mergermarket, heralded as the most important event of its type in Europe, and it recognised the achievements of dealmakers from the financial, legal, corporate and private equity communities.

Intralinks was the lead strategic partner at, and sponsor of, the awards and had an integral role in the evening with Fred Mather, EVP, Global Sales, presenting eight awards in total including M&A Deal of the Year. This prestigious title was awarded to the Roche Group and the recipient, Severin Schwan, the CEO of Roche Group, commented on their strategy for success. He cited that Roche and Genentech saw the potential of a pharma biotechnology partnership early on and realized that the new combined company would enhance innovation by sharing intellectual property and technologies.

There were some other outstanding winners to whom Fred had the opportunity to present prestigious awards. One being the investment group Silver Lake Partners, who won the award for Private Equity Deal of the Year due to its acquisition of Luxembourg-founded Skype Technologies. Lazard were also amongst the winners and was awarded the prominent title of Financial Advisor of the Year, having advised across a broad range of sectors and geographies, including Barclays’ sale of BGI to BlackRock for $15.2bn.

Unsurprisingly, The Legal Advisory of the Year award went to Linklaters who has topped mergermarket deal tables consistently throughout 2009 with landmark deals. I’m delighted for Linklaters to receive the accolade as this is a company we work closely with and support on a global level so it was good to see them gain the recognition they deserve. If you haven’t seen our latest news on Linklaters' selection of Intralinks as a preferred supplier of M&A virtual datarooms then click here.

Overall, it was a great evening giving us a chance to network with the community and I must say it was encouraging to be an environment where people were upbeat with a positive outlook for 2010. 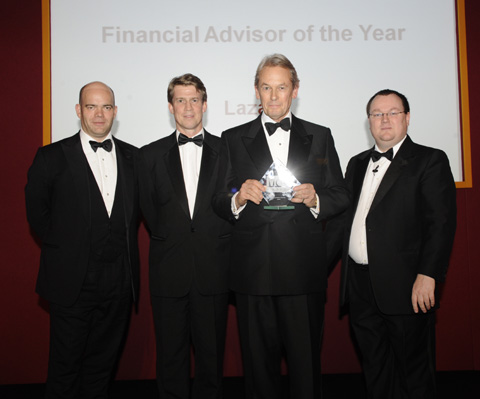 Fred Mather (second from left) with the Financial Advisor of the Year, Lazard.