Last Tuesday witnessed the Intralinks sponsored Acquisitions Monthly Annual European M&A Awards held at the fabulous Hilton, Park Lane in London. Now in its twelfth year, the event, hosted by Thomson Reuters, was attended by many of the world's most senior, successful and respected M&A deal makers and celebrated the achievements of the M&A industry in riding out a difficult year.

The British comedian, Marcus Brigstocke was the host for the evening and he certainly added to a jubilant mood, at one point explaining his understanding of M&A, he referred to 'Murders and Accusations'. Marcus Brigstocke along with Henry Gibbon, the editor-in-chief of Acquisitions Monthly, presented the awards to the deserved winners. Highlights included Lazard winning M&A Bank of the Year and the UK M&A Advisor award going to JP Morgan Cazenove. The full list of winners can be found here. 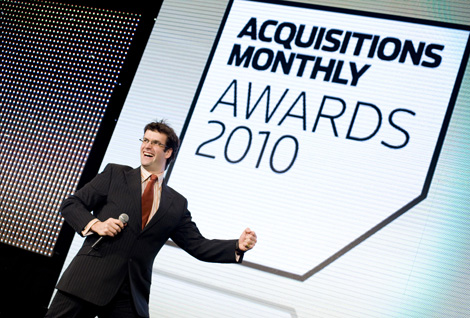 When I asked Henry Gibbon for his thoughts on the event he observed - "This year's Acquisitions Monthly Awards recognizes some significant transactions during an unprecedented period for M&A, a period during which landmark-defining deals have had to be completed and opportunistic acquirers have taken advantage of an uncertain climate. 2009 was the most challenging year in M&A since 1991. The evening served as a tribute to the success of company chief executives in completing M&A deals against formidable economic and political odds."

So although we’ve experienced a challenging 2009, it seems the M&A market is starting to build momentum. The Intralinks Deal Flow Indicator is our quarterly inside view of the trends that we are seeing in the global M&A market. Our Q4 report highlights a 12% increase in global deal activity in Q4 when compared to Q3 2009. Also, the number of deals in Q4 2009 is up to levels seen back in Q1 2008 and comes on the back of three straight quarters of double-digit deal growth in 2009. For more details read the full report here.

Thanks to all at Thomson Reuters for organising such a great event. I look forward to the next one and catching up with the community and our clients again very soon.

An overview of the Acquisitions Monthly Awards 2010