Outside of Brazil, there has only recently been talk of the rest of Latin America as a possible, let alone, desirable investment environment. The overwhelming share of analyst voice has been dedicated to the regional giant, Brazil, whose 2009 GDP of $1.574 trillion almost doubles the next contender which is Mexico coming in at $874 billion. In fact if you put all the remaining LatAm countries together, the combined total GDP of $1.526 trillion still does not beat Brazil’s GDP.

This information begs the question- why should the international investment community care about the other smaller players in the region? Is it possible for a country like Colombia to attract attention given the dominant voices in the area? Well, if you ask the experts... out of 183 countries ranked, Colombia is the easiest country in Latin America in which to do business, coming in at #37 overall, with Chile close behind at #49. The 500 pound gorilla finds itself in the bottom third, 129 out of 183.

I recently had the privilege of attending the Andes Investment Summit held in Cartagena, Colombia. The nostalgic, colonial backdrop of the event provided an interesting contrast to the forward-looking conference investigating the contemporary investing climate. This two-day event gathered over 100 members of the international investment community to discuss challenges affecting the region today and the opportunities for tomorrow. With LatAm being an emerging player on the market, they are beginning to “professionalize”, or streamline, their business development. This is especially important as cross-border deals increase along with global competitive pressure. In addition to a recent influx of cross-border deals, many regionally based mega-deals are taking place, which signifies even greater growth.

The net/net of these discussions is that there is an overwhelmingly positive outlook for the Andes region. The tremendous growth in infrastructure, mining/oil & gas industries, unique market conditions and stabilizing economic and political climates all point to an attractive investment climate, both now and in the future. 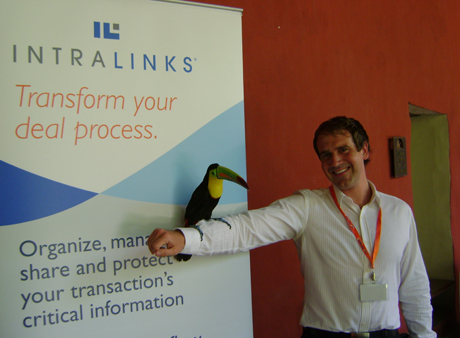 Easley Edmunds and friend at the Andes Investment Summit in Cartagena, Colombia

Katherine is a member of the Intralinks Alternative Investments team and proud member of the Intralinks family since 2010. In the past decade, she has held a number of global sales and marketing leadership roles and is taking that collective experience direct to the customer. She is thrilled to be executing on the vision to be the most dynamic force for digital transformation of the global alternative investments ecosystem.