I recently returned from Mexico where I presented at an event that was co-sponsored and co-hosted by Intralinks and Mergermarket. The purpose of the event was to discuss the importance of Mexico as an emerging participant in the global economy and the maturing M&A and corporate finance activity with more than 100 bankers, lawyers, corporate development professionals, and executives.

I recently returned from Mexico where I presented at an event that was co-sponsored and co-hosted by Intralinks and mergermarket. The purpose of the event was to discuss the importance of Mexico as an emerging participant in the global economy and the maturing M&A and corporate finance activity with more than 100 bankers, lawyers, corporate development professionals, and executives.

During the event, Miguel Messmacher, Mexico’s Chief Economist and Secretary of Treasury and Public Credit, discussed the increase in M&A deals and IPOs among the nation’s companies, and that the increasing diversity across industries is a key factor behind the highest economic growth that Mexico has ever experienced. The Intralinks Dealflow Indicator reinforces these comments, having found that Mexico’s M&A deal activity grew 35% in 2010 over 2009. As Messmacher discussed Mexico’s current economic situation and the important steps they are undertaking to become a more globalized nation, it was exciting to think that a platform like Intralinks could help them transform their M&A activities and improve their global deal flow. By giving companies the ability to manage more deals, Intralinks is ideally positioned to enable companies to further capitalize on positive, overall growth in global deal activity. 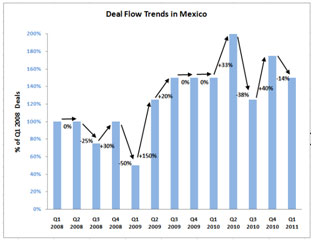 These are heady times in emerging Latin American markets, and we were proud to participate in this event. Latin America’s deal community has momentum, displaying solid growth that is both steady and consistent. At its recent peaks, the Intralinks Dealflow Indicator found that the Mexican deal market was twice as active as it was in the so-called global heyday of M&A in Q1 2008. This demonstrates that, despite the fact that elsewhere in the world M&A is just returning to pre-crisis levels, stable and accessible emerging markets like Mexico grew faster and more consistently, only pausing briefly at the start of 2009 because of the impact of the global economy. Mexico continuously attracts private equity development and the interest from large strategic players abroad due to strong global interest in natural resources and infrastructure in the region. Additionally, the country is a hub for mining, especially silver, as well as automotive and textile manufacturing and, as wages rapidly rise in China, Mexico’s manufacturing base will become even more attractive globally.

With increased intra-regional cross border emerging market deals, and improving trends in deal activity for Latin America, Intralinks is in the unique position to help companies in the maturing Mexican M&A market capitalize on opportunities, while providing them with access to cloud-based solutions that can be immediately implemented. We also provide a strong multi-lingual solution, built on best practices gained from working with leading organizations, enabling Intralinks to truly partner with companies and advisors in the region.

As one of Latin America’s largest economies, Intralinks looks forward to continuing to participate in the overall growth taking place in Mexico.