The creative team at Information is Beautiful designed an alarming – and yes, beautiful – interactive graphic that shows the size and scope of data breaches over the last few years.

Sometimes seeing is believing. The creative team at Information is Beautiful designed an alarming – and yes, beautiful – interactive graphic that shows the size and scope of data breaches over the last few years.

The data is not new, but its arresting presentation brings to life the startling reality that our personal data, even our own identities, are increasingly vulnerable. Here are the Top 10 known data breaches from 2004 through mid-2013: 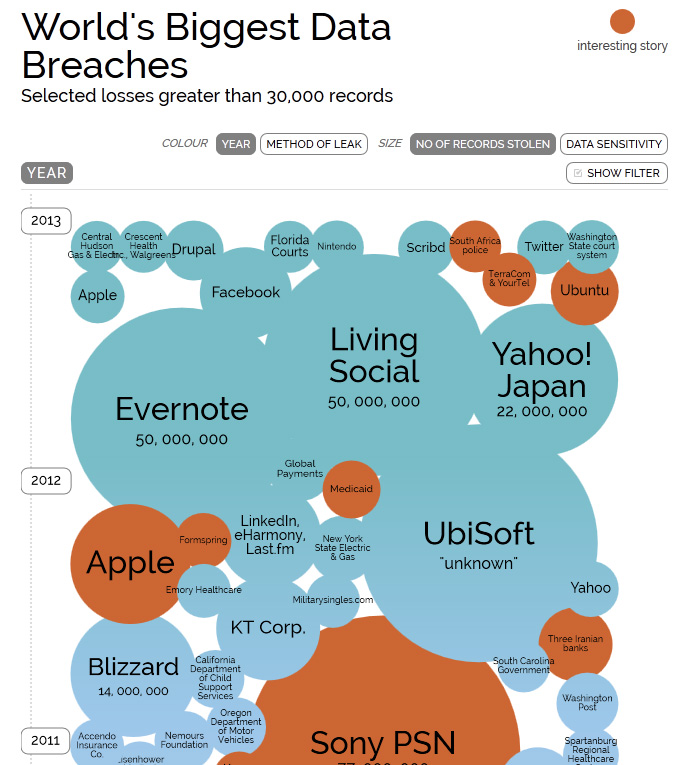 10. Sony Online Entertainment ~25M Records (2011). This was the second data breach for Sony Online, a result of hacking.

5. US Military 76M Records (2009)
A veterans organization failed to properly dispose of a hard drive properly, resulting in this theft.

All of these are dwarfed by the recent security breach of over 160 million credit card records from a number of companies, resulting in over $300 million in theft. Of course, sometimes it’s not the size of the breach, but the value and sensitivity of the loss that matters: in 2013, we’ve seen a large data breach from the Washington State court system, and over 4,000 records taken from the Federal Reserve related to banking executives.
Sharing information is essential to our digital economy, but trusting valuable information takes constant vigilance and working with the right partners.