With the boom in deals the quarters before, and the dip in activity the quarters thereafter, growth predictions for Q2 2013 were mediocre at best. Frankly, a ‘slow boat to China’ could move faster than our expectations. No one would have guessed that there would be such a large swing in early-stage M&A activity for Q2 2013, but that’s just what the Intralinks Deal Flow Indicator (DFI) reported. 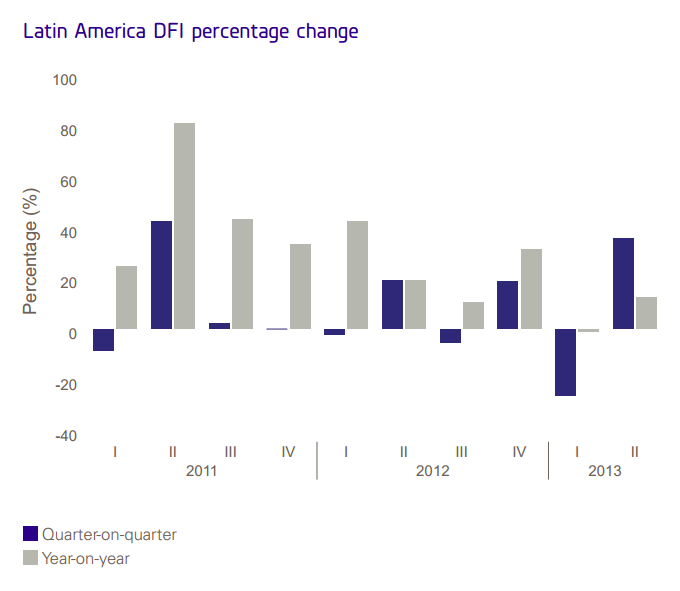 From an uninspiring first quarter, it’s clear that Latin America emerged prepared for a fight. There was astounding growth in early-stage M&A activity, with gains of 13% YoY and 35% QoQ, an impressive figure for Q2 given the first quarter’s languid activities.

Without a doubt, in my opinion, the drivers of second quarter’s growth had to be the deals from JBS, a Brazilian meat supplier, and Office Depot, a US-based firm.

JBS completed by far the largest transaction of the quarter. With their purchase of Grupo Zenda, for US $2.8 billion, JBS launched itself into a leading position within Brazil’s meat processing industry. Now, don’t get too excited. Let’s not forget there was another big deal driver in LATAM’s market last quarter, Office Depot’s sale of Grupo Gigante. To finance share buybacks and pay off debt, Office Depot sold the retailer and hypermarket parent company for over half a billion US dollars, contributing to the strong movement in Q2.

The significant activity and results we observed this quarter prove that Latin America is a force to be reckoned with.