Social Media and M&A: A New Look for the Dealmaking Process

M&A professionals are adopting social media and community-based deal networks to reach a bigger target audience and speed up the dealmaking process. 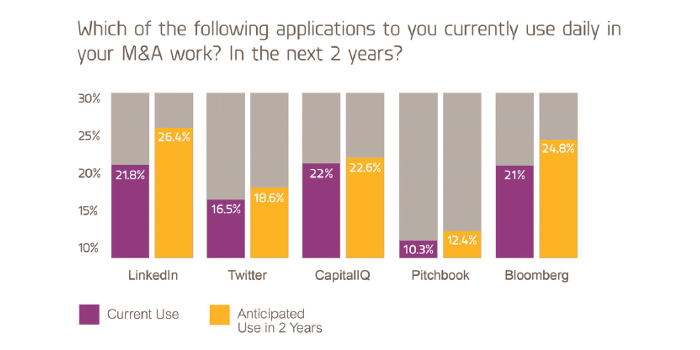 Did you know? More than 55 percent of dealmakers currently use an online deal network to support deal sourcing, according to the results of Intralinks Dealnexus™ survey of more than 2,400 merger and acquisition (M&A) professionals.

As Intralinks shared in their ‘How Deals Get Done’ report, more and more M&A professionals are adopting social media and community-based deal networks to reach a bigger target audience and speed up the dealmaking process.

These networks, along with social media sites, are becoming useful tools for dealmakers alongside traditional methods, so much that “social networks like LinkedIn and Twitter are an integrated and successful component of deal networking, broadly used across the industry.” Among users of deal sourcing platforms, “more than 50 percent of buy-side and over 40 percent of sell-side professionals have closed a deal that was sourced on an online network” – proving that the traditional M&A process is evolving.

The real question is, are online deal sourcing platforms here to stay? “Two-thirds of respondents predict that online deal networks will change the way deals are done, while over 60% expect deal sourcing to become more automated over the next five years.”

Only time will tell, but due to its efficient, less time-intensive deal process, social media and community-based deal networks could become the standard dealmaking process of the future.