So far 2014 is a year of mergers and acquisitions rebound. And Europe is exceptional, with Germany acting as a dealmaking mainstay for the region. 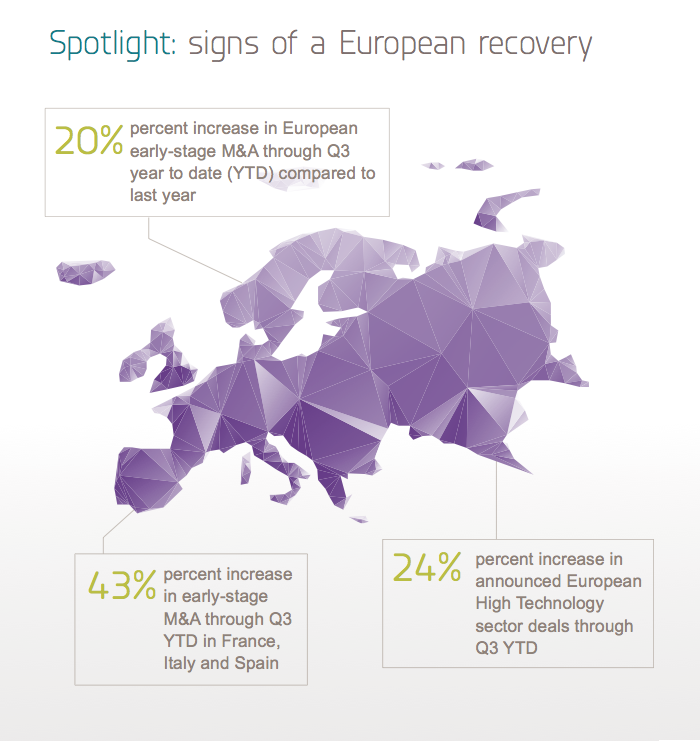 So far 2014 is a year of M&A rebound. And Europe M&A is exceptional, with Germany acting as a dealmaking mainstay for the region. Also, the economies of France, Spain, and Italy are beginning their recession thaw and will be publicly heating up in Q1 2015.

This Euro-surge is occurring despite sluggish economic expansion. But the rise indicates how EMEA offers a pool of top-shelf targets and has plenty of recovery potential left in it. By comparison, with an 18.7 percent growth rate, North America has held only a narrow lead in the last four quarters.

Some statistics might help: In Europe through Q3 2014 year to date, there was:

Besides high tech, other strong sectors through Q3 YTD were health care, and media and entertainment.

There are multiple reasons driving this resurgence. The biggest factor is Germany — which is expected to keep driving M&A activity into early 2015. Foreign investors are interested in its exports businesses, particularly those of the Mittlestand. This is the tier of small manufacturing companies credited as driving much of Germany’s economic growth. In general, they are independent or privately owned. As the family owners of these companies retire, the firms make attractive acquisitions.

Additionally, as mentioned, France, Spain and Italy are seeing economic recovery — the Intralinks DFP claims this will result in a “significant increase in deal announcements” through Q1 2015. The Europeans are going cross-border, too: Industrial powerhouse Siemens AG bought out U.S.-based Dresser-Rand, a provider of energy solutions, for $7.6 billion. And France’s massive ad company Publicis Groupe made a $3.7 billion cash offer for U.S.-based Sapient, a media and marketing firm.

Clouds to Rain on M&A Parade?

Are there potential threats? Plenty. To name a few: The tension over the Ukraine’s future, fear of Ebola spreading, and Japan’s slipping into recession could dampen M&A activity in Europe and beyond. Additionally, many dealmakers believe the tech sector is showing signs of a bubble, says an Intralinks dealmakers sentiment survey.

Certainly growth and demand overall could be better. But barring catastrophe, the fundamental M&A driver — the need for buyers and sellers to deliver shareholder value — isn’t going anywhere. Deals will be made in Europe and elsewhere.