Recent analysis by Intralinks of the code names used in M&A transactions found that M&A code names may not be as effective as intended. 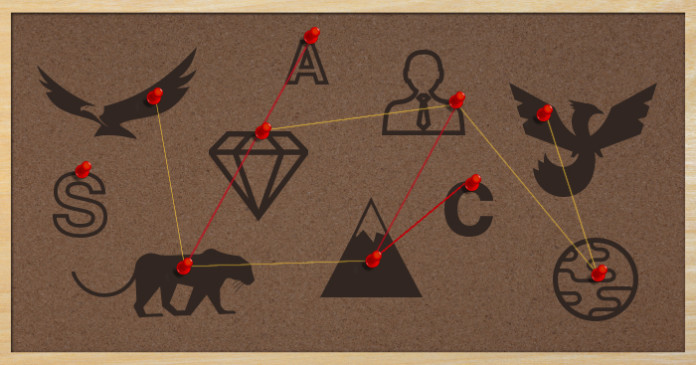 "What's in a name? that which we call a rose
By any other name would smell as sweet;"
"Romeo and Juliet" Act 2, Scene 2

What do Eagles, Phoenixes and Falcons have in common? Clearly they are all names of birds (one admittedly mythological), but for merger and acquisition (M&A) dealmakers, they may also sound familiar for another reason: they comprise three of the 10 most popular code names for deals globally.

The typical M&A deal can last for six months or more and involve dozens of people and thousands of pages of confidential information. During that time, the risk of a deal leaking prematurely is high. As a recent report by IT security company FireEye revealed, cyber criminals have also been targeting M&A bankers, lawyers and their clients in search of information about potential M&A discussions which could affect the share prices of the companies involved.

History of the M&A Deal Code Name
To try to maintain secrecy during the M&A process, dealmakers usually assign a code name to each M&A transaction or project, and are supposed to only refer to the code name in communications about the deal.

However, recent analysis by Intralinks of the code names used for almost 17,000 M&A transactions that used an Intralinks virtual data room (VDR) since 2009 found that these code names may not be as effective as intended, and could even be putting deals at risk.

Choosing a code name for a new M&A deal is a rite of passage that is usually left to the most junior member of the client's investment banking or legal team. In the same way that many, if not most, individuals tend to choose the same password for each of their online accounts or services, a failure of imagination, or perhaps human psychology, appears to be responsible for a curious clustering of M&A code names that our analysis uncovered.

Top Code Names by Region
The dinosaurs still rule the Earth (well, through their descendants, the birds): as well as comprising three of the top ten names, a bird also occupies the top spot, with Eagle being the most frequently used name globally as well as in North America. As the national bird, and national animal, of the U.S. and the centrepiece of that country's Great Seal, the popularity of Eagle is perhaps understandable. However, its appeal is not universal (check out the infographic below).

While the Eagle flies high in North America, it rapidly loses altitude as it crosses the Atlantic to Europe, the Middle East and Africa (EMEA). Its popularity there is only half that of North America, with Blue replacing Eagle as the most frequent name — perhaps a subconscious choice by European M&A bankers reflecting on the many woes that have beset Europe in the past few years: economic sluggishness, bank failures, sovereign debt crises and country bailouts.

While nevertheless still the third most popular name in EMEA, the Eagle's journey on to Asia Pacific is not a smooth one, and it drops further to 10th place before crashing completely in Latin America to 147th. In Asia Pacific, the Eagle is knocked off its perch jointly by Venus, second planet from the Sun and the Roman goddess of love and beauty, and by Phoenix, the mythological Greek creature that obtains new life by arising from the ashes of its predecessor. Latin American bankers prefer Andes, the longest continental mountain range in the world, which crosses seven South American countries from Venezuela in the north to Argentina in the south.

Frequency of Top Code Names
Birds, colours, a precious stone, a Greek god, an endangered animal and a planet are all featured in the top 10 most frequently used code names globally. These are (in order of popularity): Eagle, Blue, Phoenix, Alpha, Green, Falcon, Tiger, Apollo, Diamond and Neptune (which together account for 4 percent of all deals).

M&A bankers also seem to prefer code names that start with particular letters — S is the most popular (11 percent of all deals), followed by C (9 percent of deals) and A (8 percent of deals). Even more fascinating is the tendency of M&A bankers to choose a code name that has the same first letter as the name of their client or the target being sold in an M&A deal. Apart from deals where the name of the client starts with the letter X, for all other letters of the alphabet the first letter of the client name was also by far the most commonly used first letter for the code name: 20 percent of all deals shared this worrying trait. Given that there are 26 letters in the (English) alphabet, the probability of choosing a code name starting with a particular letter at random is 1/26 or 3.8 percent. So, on average, the choice of a code name is over five times more likely to start with the same letter as the client name than we would expect by chance alone. For some client names, the percentage is even higher. Client names starting with the letter S shared a code name starting with the same letter in 27 percent of cases, while such sharing dropped to 10 percent for client names starting with the letter J.

Something is Rotten in the State of Denmark ("Hamlet" Act 1, Scene 4)
Why should any of this be of concern? Overuse of the same code names for different M&A deals and use of code names whose first letter is the same name as the client or target in a deal can compromise security, by, for example, increasing the possibility of confidential information being sent to the wrong person or enabling hackers or accidental eavesdroppers to be able to more easily guess the names of the companies involved when they have access to other partial information about a deal.

There are over 60 different species of eagle and to an inexperienced birdwatcher it may sometimes be difficult to distinguish between them. Fortunately, for the birdwatcher, mixing up the golden with the bald only results in mild embarrassment. For under-pressure junior bankers, working long hours on multiple deals, mistaking one eagle for another could be more calamitous. Sending confidential information from one Project Eagle to the parties on a different Project Eagle, or mixing up information or the buyers intended for one data room with another, would result in more than mild embarrassment, potentially sending a high flyer into a dramatic free fall. Flying like an Eagle, hunting like a Tiger and shining like a Diamond may seem appealing, but M&A practitioners thinking of a code name for their next deal should be aware that there are plenty more birds in the sky, animals in the jungle, and stones to choose from (although ladies may disagree with the latter). My own personal favourite (actually used only once in the sample of almost 17,000 deals we looked at): Wine, preferably a fine white burgundy. 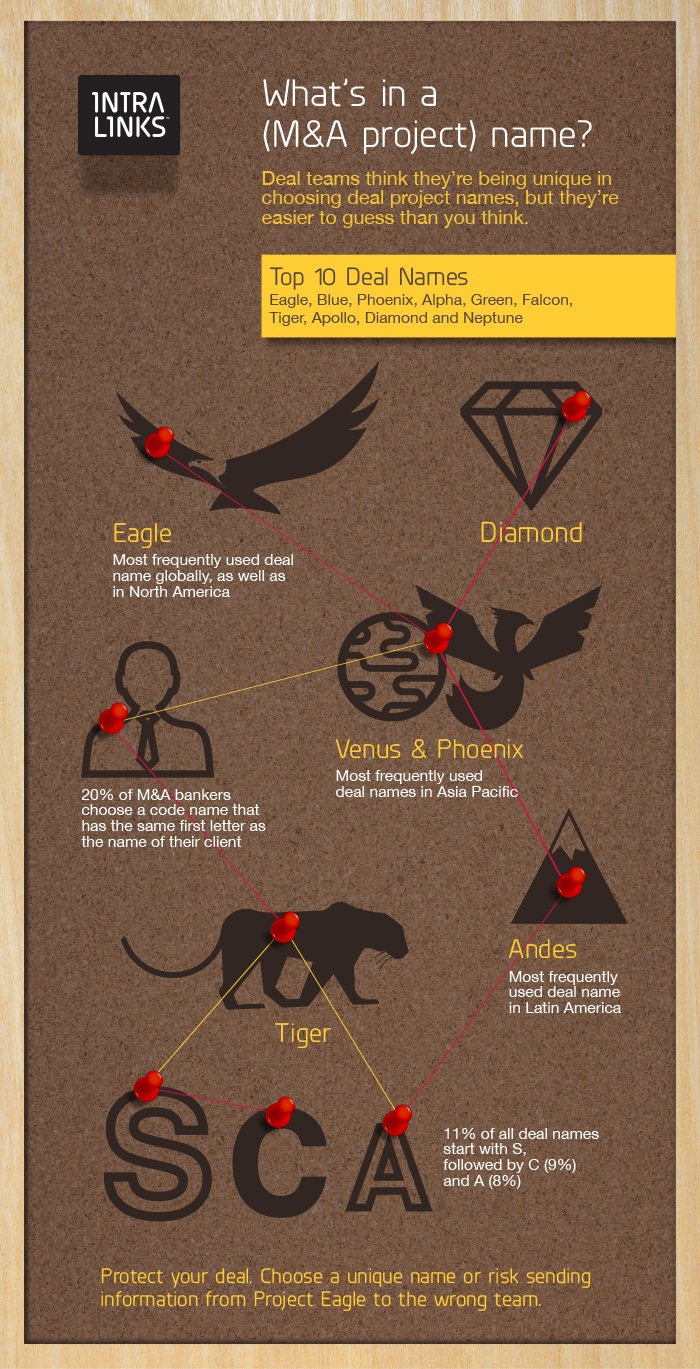