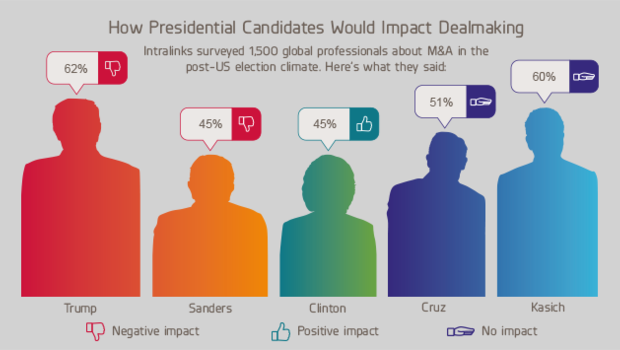 According to an Intralinks survey of 1,500 M&A professionals, two-thirds of M&A banking professionals worldwide believe that M&A activity would be negatively impacted if U.S. presidential candidate and current Republican primary frontrunner Donald Trump were to become president. The survey found that Trump is viewed as the presidential candidate most likely to have a detrimental effect on the level of M&A activities, with Democratic primary frontrunner Hillary Clinton viewed as the candidate most likely to have a positive impact on M&A activity.

More global dealmakers identified Trump as having a negative impact on M&A activity than Senator Bernie Sanders, despite the fact that Sanders, a self-described socialist, is sharply critical of financial services companies and advocates for stronger regulation of the sector.

Respondents indicated that if elected:

Intralinks conducted its quarterly Global M&A Sentiment Survey, polling dealmakers during April 2016 about the health of the M&A market. The survey received 1,500 responses from dealmakers across the globe.