Brexit: Will It Sink the European M&A Ship?

Which way will the British population vote this week in regard to leaving the European Union and how will this decision impact European M&A and global M&A? 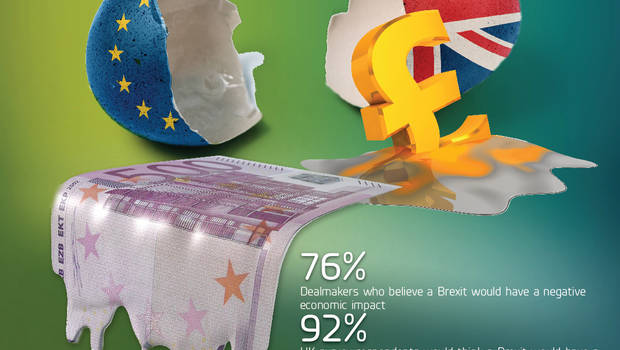 Which way will the British population vote this week? Global dealmakers are praying that those on the fence are listening to David “Remain” Cameron, rather than being lured out of the European Union (EU) by Boris “Leave” Johnson. Intralinks’ latest survey of almost 1,500 dealmakers clearly states a majority have serious concerns about the implications of a ‘Brexit,’ with 65% of respondents expecting European asset values to fall substantially.

Cash-rich investors may be licking their lips at the prospect of undervalued assets, though many will keep their proverbial tongues in their mouths (and cash in their wallet) until the level of uncertainty reduces. Decreased asset values would have a wider than expected impact on European economies, especially those that are accustomed to foreign investors searching for a safe return; the UK is the obvious economy, though Germany and to a lesser extent France and Italy, may be in for a shock.

While the EU referendum has attracted a global audience, any effects will be felt first on home soil. Unfortunately, the majority of dealmakers in the UK and Europe, 87% and 92% respectively, believe the impact of a ‘Brexit’ would be negative from an economic standpoint. Clearly, they are as worried as the Bank of England: its statement that uncertainty surrounding the EU referendum is the “greatest global risk” to financial markets will have dealmakers hoping it’s all just a dream.

Unsurprisingly given the above, 73% of Europe, Middle East and Africa (EMEA) respondents, and 88% of UK respondents believe a ‘Brexit’ would be negative for M&A levels across Europe. Currency volatility and market uncertainty are leading to stalled deals, contributing to the fear that M&A bankers will be left out in the cold.

None of the above bodes well for the UK or the wider EMEA region. However, while the majority of dealmakers believe a ‘Brexit’ scenario would have negative consequences, only 20% of global respondents think the UK will vote to leave.

Come the morning of 24th June, all of these worries will likely be forgotten.

Or not, if the latest national opinion polls are anything to go by.