New research by Intralinks reaffirms the growing influence of social media and online deal sourcing networks on the M&A industry. 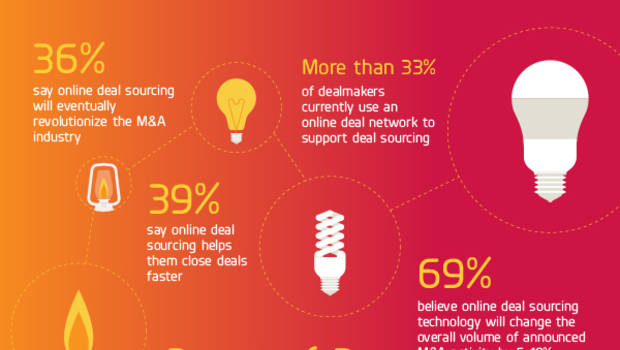 Deal origination has long been a staple of M&A tradeshows, webinars, publications and golf course banter, particularly at the proverbial ‘19th Hole’. Today, hot topics in the field seem to include things like the ongoing deployment of dedicated deal origination teams — a practice conceived originally by private equity behemoths like H.I.G. Capital, Platinum Equity and The Riverside Company — by increasingly smaller private equity groups. Equally popular among private equity firms trying to obtain an edge is hiring full-time operations professionals. Ostensibly, putting industry veterans on payroll signals to potential LBO targets that this PE firm, unlike all the rest, really has sectoral expertise. It also allows the private equity group to tap into new industry-specific professional networks, a tremendous advantage in seeking out deals before the competition.

One topic, however, that mysteriously continues to elude the limelight when it comes to deal origination is that of online deal sourcing — particularly in light of new research we carried out on the subject which indicates that enthusiasm for, and adoption of, online deal sourcing is at all-time highs. This begs the question: why aren’t more people — particularly boutique M&A advisory and mid-market private equity professionals — talking up a storm about online deal sourcing? More on that later. Let’s first set the stage by distilling the findings of our new report.

Back in 2013, Intralinks carried out a global survey of dealmakers with a singular objective: to understand market perceptions around, and adoption of, social media and online deal sourcing technologies to support dealmaking activities. To our surprise, awareness and adoption levels were significantly higher than expected even back then. Fast-forward two years and, in December 2015, Intralinks decided to revisit the subject, and see if, and by how much, industry attitudes have changed. You can access the complete report here but, for now, here are three findings that stood out:

Specialized online deal sourcing platforms appear to be gaining a more loyal daily audience, with 30% of users reporting that they sign in daily. We interpret the underlying cause of the exodus in the full report, but the short version of the explanation is simply that dealmakers have realized that they no longer need to compromise, that specialized deal networks have evolved to the point where they can offer all of the upside of a large online community of dealmakers, with none of its downsides.

The proof is in the polling: online deal sourcing and the specialized deal networks that foster it has embedded itself even deeper in the minds, web browsers and smart phones of dealmakers. And, with enthusiasm for online deal sourcing higher than ever before, this kind of growth is likely to continue. So, revisiting our question from earlier, if one in three dealmakers is using specialized deal networks and, of them, almost one in two, is closing deals doing so, how come no one is talking about it that much?

I suspect the answer can be found in a conversation I had with a long-time client and champion of Intralinks Dealnexus a few weeks ago. I was looking for a reputable, long-time private equity customer to do a video testimonial with us, and I was certain this chap would help. To my surprise, though, he refused, adding “Tony, you know we love you guys. Here’s the thing: We’ve got a good thing going with Intralinks Dealnexus and we just don’t want too many people finding out about it.”

A lot of things can change in two years, but one thing is for sure: private equity groups opening up about their deal origination secrets is not one of them!

To access the complete report, please visit: Deal Networks and the Evolution of Getting M&A Deals Done.

Intralinks Innovation: How Technology Will Transform the Dealmaking Process

The New Reality of Dealmaking