Failed merger and acquisition deal completions impose significant economic and reputational costs on acquirers and targets. Intralinks recently published the findings of a long-term, global study into abandoned acquisitions – deals that are announced but which subsequently fail to complete. Together with the M&A Research Centre at the University of London's Cass Business School we investigated more than 78,500 M&A deals announced over 25 years, to identify the significant predictors of failed deals and the strategies that acquirers and targets can employ to increase the likelihood of successful deal completion. We also interviewed 40 global M&A professionals, and incorporated their insights into our report, Abandoned Acquisitions: Why do some deals fail to complete?

This, my third blog post on our study, continues my deeper dive into the most significant predictors of deal failure. In this post, I’ll be discussing how the sizes of the acquirer and target affect the probability of failed deal completions. If you want to read my other posts, you can find them on Intralinks' dealmaking blog. If you want more details about the methodology and data sample behind our study, please download the full report here.

Our analysis revealed that, for publicly listed targets, the absolute size of the target (as measured by the target’s sales) was the second most significant factor affecting the probability of deal failure, with acquisitions of larger targets less likely to complete (the most significant factor, target break fees, was covered in my second blog post which you can read here). 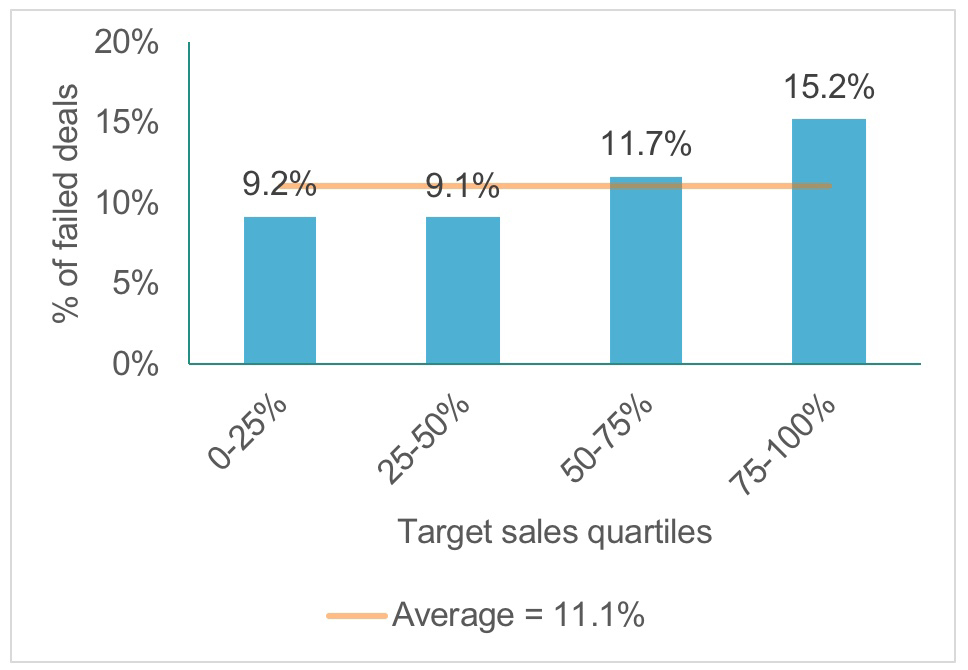 “Deals involving larger targets are more likely to fail, because of competition, larger market share and their position is sensitive in terms of the industry and national economy,” says a managing director of a Hong Kong private company.

These findings likely reflect the fact that larger deals involve many more moving parts - and therefore scope for breakdown - including internal issues and external difficulties such as a regulatory hitch or a failure to secure financing. The only way to address these problems is for companies to prepare early and thoroughly.

“Early engagement with all parties, including regulators and authorities, is very helpful,” says the head of strategy of a US private company. “And you need to have financing sources arranged well in advance.”

For acquirers, managing a public M&A transaction usually requires significant resources and experience. Our study found that the size of the acquirer (as measured by the acquirer’s sales) was also a significant predictor of the probability of deal success or failure, with smaller acquirers more likely to see their deals fail. As the chart below shows, the smallest acquirers (those whose sales fall into the lowest quartile, the far left-hand column) had a deal failure rate of 18% - compared to the average of 16.1%. 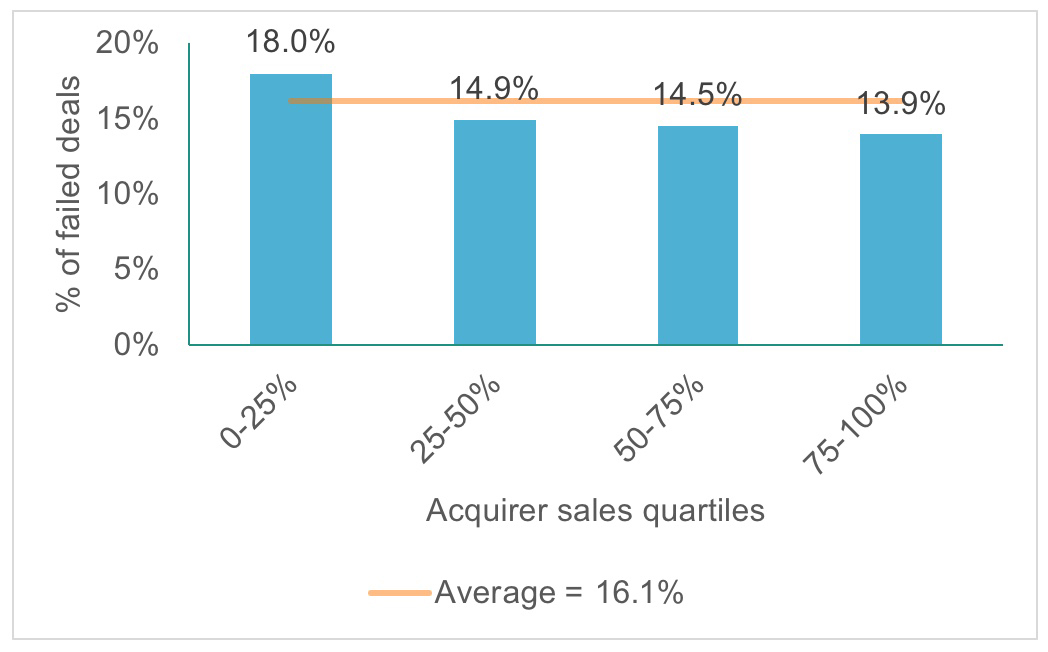 “Larger firms have more headroom for risks around issues such as financing – and they are just used to doing more deals,” says the head of strategy of a Swiss public company.

However, smaller acquirers shouldn’t simply accept that their chances of deal success are lower. By addressing resourcing issues early on, they may be able to reduce the risk of failure. For example, a company might spend more time on preparation or engage multiple advisers at an earlier stage.

“Even though smaller firms have fewer internal resources,” advises a senior partner of a Scandinavian private equity firm, “they can stand out from larger organizations by being more flexible.”

As well as absolute size, our study also found that the relative sizes of target and acquirer were important. For acquisitions of private targets, it was the ratio of target sales to acquirer sales that was the most significant predictor of the probability of deal failure or success: deals involving larger targets relative to smaller acquirers were less likely to complete. 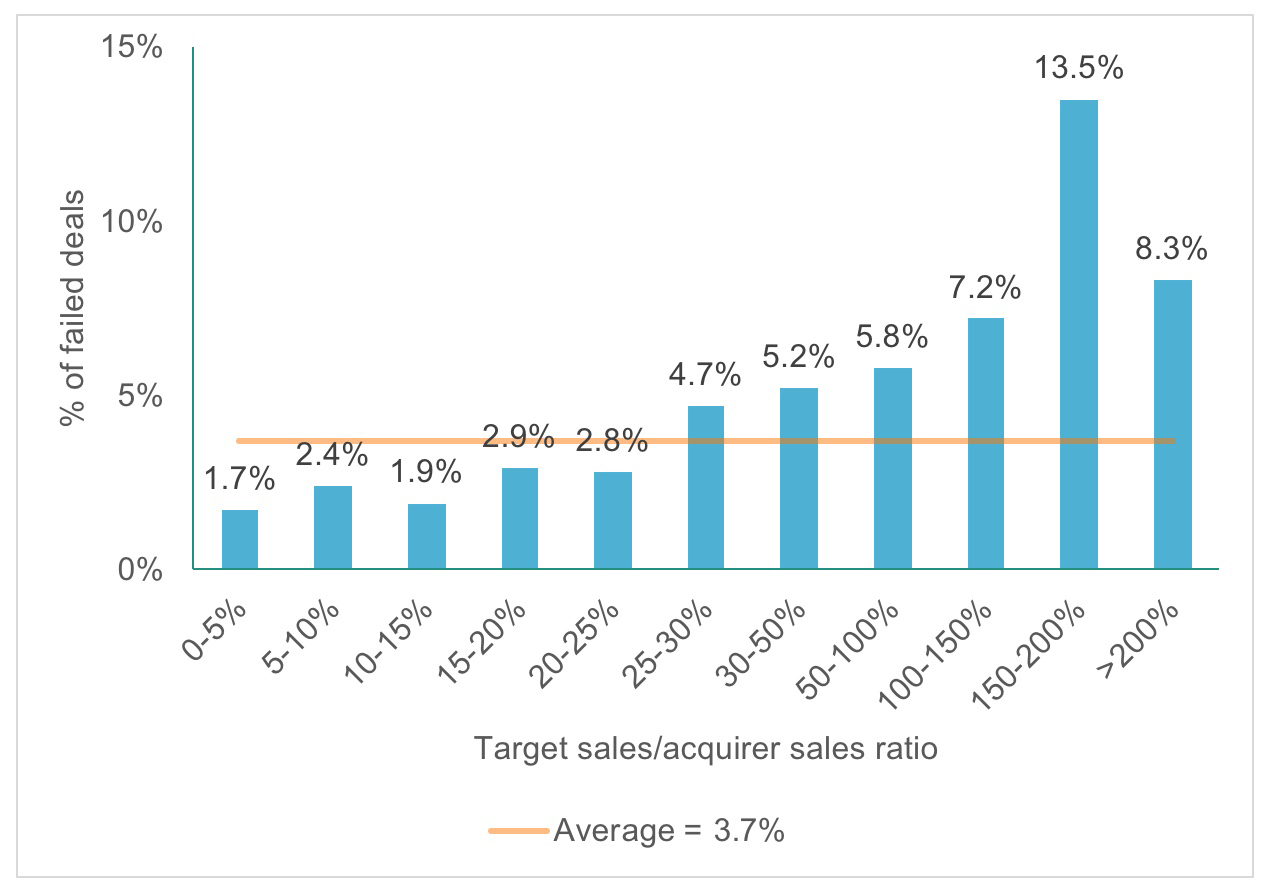 “Smaller acquirers must be aware of potential risks involved, and the deal should be timetabled appropriately. They need to ensure they can communicate the synergy benefits to both the parties. And, of course, they must have adequate finance available as early as possible,” says the managing director of a Hong Kong private company.

To find out more about the predictors of deal failure, and the strategies acquirers and targets can use to avoid the deal failure trap, download Abandoned Acquisitions: Why do some deals fail to complete?