Intralinks recently published the findings of a long-term, global study into abandoned acquisitions – deals that are announced but which subsequently fail to complete. Together with the M&A Research Centre at the University of London's Cass Business School, we investigated more than 78,500 M&A deals announced over 25 years to identify the significant predictors of failed deals and the strategies that acquirers and targets employ to increase the likelihood of successful deal completion. We also interviewed 40 global M&A professionals, and incorporated their insights into our report, Abandoned Acquisitions: Why do some deals fail to complete?

This is my fourth blog post on our study, as we continue to dive deeper into the most significant predictors of deal failure. In this post, I’ll discuss how the target’s initial reaction to the acquirer’s approach affects the probability of deal completion. In particular, I will share with you our findings regarding hostile and unsolicited acquisitions compared to friendly deals. If you want to read my other posts, you can find them on Intralinks' Dealmaking blog. If you want more details about the methodology and data sample behind our study, please download the full report here.

For publicly listed targets, our study found that the target’s initial reaction to the bid was the third[1] most significant factor influencing the probability of deal completion. If an acquirer’s offer was initially considered to be a hostile or unsolicited acquisition[2], the probability of deal failure increased by 32% and 41% respectively. 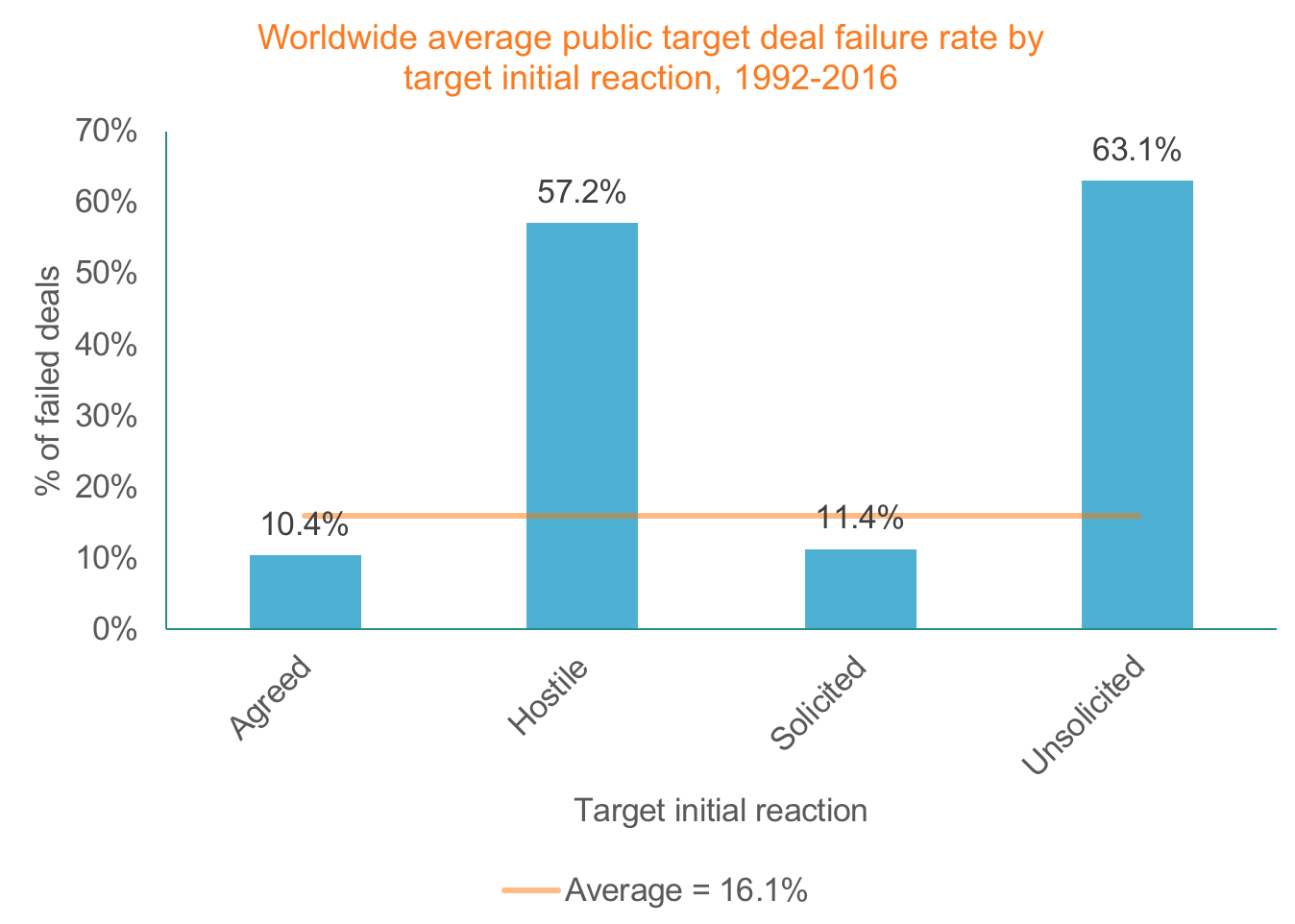 “In reality, many hidden challenges come up despite all the preparations and advice,” said a director of corporate finance of an Australian public company. “There are tough obstacles during the deal process, which can become unacceptable – sometimes leading to failure.”

In practice, acquirers attempting hostile acquisitions will usually need to secure the services of specialist advisers with experience in overcoming the issues that such transactions present. In the end, the fate of a publicly-owned business should be determined by its owners rather than its management, so in many cases the acquirer will appeal directly to the target’s shareholders. In either case, winning over the target often requires the planning and execution of a strategic campaign, which is more easily accomplished by larger acquirers.

“Larger acquirers have a clear strategy that is devised before targeting a certain business,” said a managing director of a French private equity firm. “Large companies can put [all] their focus on completing a deal, as they need to achieve their strategic targets on a given timeline.”

To find out more about the predictors of deal failure, and the strategies acquirers and targets can use to avoid the deal failure trap, download Abandoned Acquisitions: Why do some deals fail to complete?

[1] The first and second most significant factors, target break fees and sizes of the acquirer and target, were covered in my earlier posts on our Dealmaking blog which you can read here and here.