What Women IN Business Can Learn From Women in Sport 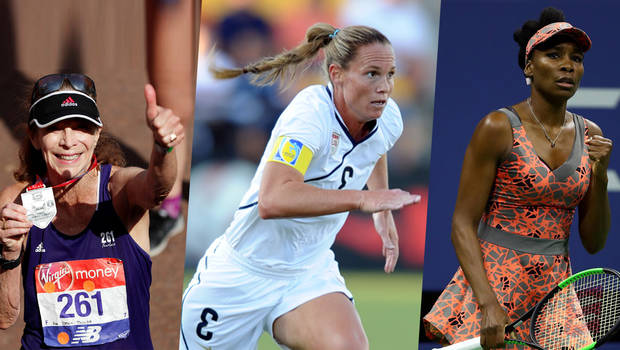 With the elegant and inclusive royal wedding now in our rear-view mirror, journalists worldwide will require some other feel-good stories to transport us, if only temporarily, away from the barrage of negative news. Galloping in to save the day is a summer packed full of major sporting events. The football World Cup and Wimbledon are the new bride and groom.

Sadly, only four percent of the media coverage will be about women’s sport, and that’s the average. World Cup fever could potentially reduce that percentage down further, even though 40 percent of sports worldwide will continue to be played by women this summer. In the professional sporting arena, women will also only earn a fraction of what their male sporting counterparts will receive (the 2018 men’s World Cup winners will receive $38 million versus $2 million for the women’s World Cup winners).

Fear not – this post ain’t no pity party! Quite the opposite. In fact, it’s worth noting just how far equality in women’s sport has come, how the courage of trailblazers has changed the landscape and what we can learn from them.

Men no longer try to forcibly prevent women from taking part in the Boston Marathon, as Kathrine Switzer had to endure in 1967, when race organizer Jock Semple tried to physically remove her from the race.

Thanks to Billie Jean King (and more recently the relentless campaigning by Venus Williams) female tennis players have received equal pay at Wimbledon and all the other majors for over a decade now. I doubt that would have happened had it not been for these inspirational trailblazers.

Switzer, who entered the marathon as the gender-neutral K. V. Switzer, wrote in her memoir, "A big man, a huge man, with bared teeth was set to pounce, and before I could react he grabbed my shoulder and flung me back, screaming, 'Get the hell out of my race and give me those numbers!’ (Interestingly enough, she later formed an unlikely friendship with Semple, who would become an advocate for women runners after they were officially allowed in the race in 1972.)

Rather than scare her off, the encounter lit a fire in her belly. Switzer became an activist for female runners (having dispelled the myth that it would make your uterus fall out!) and successfully campaigned to include women’s marathon in the Olympics.

Thanks to Billie Jean King (and more recently the relentless campaigning by Venus Williams) female tennis players have received equal pay at Wimbledon and all the other majors for over a decade now. It’s clear that some sports and their governing bodies are definitely bucking the trend, but I doubt that would have happened had it not been for these inspirational trailblazers. I can only imagine the fear they must have faced over whether their activism would damage their careers – not to mention some of the abuse they received. At times, being a pioneer may not have seemed worth it.

I know I certainly had times when I was rowing singlehandedly across the Atlantic, faced with sharks and hurricane-force winds, that it didn’t seem worth it. I had started the row with my husband as the only mixed-sex team in the race; but when he had to be rescued two weeks into the journey, I made the decision to go on alone. What helped me make that decision was reliving a conversation I’d had with the wife of one of the all-male teams where she had asked me, “So, is Andrew going to do the rowing and you’re going to do the cooking and the cleaning?”

Like Kathrine Switzer being hassled in the Boston Marathon and Venus not tolerating being paid less for winning Wimbledon, that experience was the moment that put fire in my belly. I received many comments and questions in this vein. Each one made me think, I’m just going to burn it as fuel to make me more determined to win. I now regularly say to myself, Just burn it as fuel, Debra! And every time, without fail, it shifts the situation from a negative (How dare they say that?) to a positive (Just stoking the fire, baby!).

As women in business we have to learn to burn challenges as fuel, just as our sporting heroes do. We have to not accept unjust treatment as the status quo but be prepared, à la Katherine and Venus, to stand up and be heard, or our silence will sound like acceptance. Dissatisfaction teamed with silence only leads to frustration, but dissatisfaction used as fuel for action creates lasting change.

Debra Searle, MVO MBE, is a professional adventurer and serial entrepreneur. She has launched four companies, is a published author, has presented over 40 programmes for the BBC, is a trusted corporate and TEDx speaker, and was awarded an MBE from HRH The Queen.