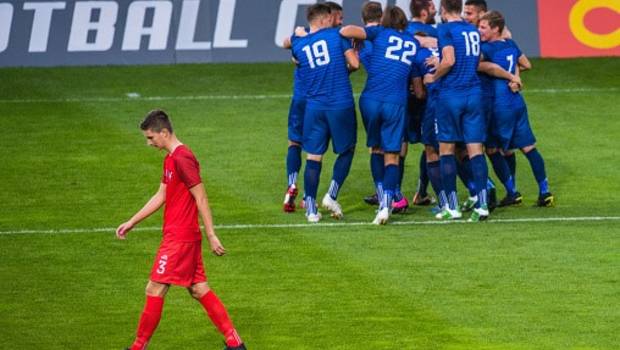 Did you see it? The photo that people say will be the enduring image of the 2018 World Cup. I’m sure you did. We all did. England’s manager Gareth Southgate consoling Mateus Uribe, the Colombian player whose failed penalty attempt led to his team exiting the World Cup.

Southgate knows this level of public failure only too well, having missed in a crucial penalty shootout during UEFA Euro 1996, denying England a place in the final. No one was better placed to hug it out with Uribe, despite being on the opposing side.

Thankfully most of us will never have to endure that level of public humiliation when we fail. Not getting a job, missing a deadline, forgetting something important or disappointing a loved one will not be viewed by tens of millions of people. Yet, it will still sting because humans put enormous pressure on themselves. So, here are four ways to bounce back from failure:

1. Reflect, learn and go again A positive approach to failure is to reflect on what happened, learn from the mistake and move on. Uribe’s learning is only just beginning but more than two decades later Southgate credits his moment of failure in 1996 as having helped shape his future success.

“I’ve learnt a million things from the day and the years that have followed it,” Southgate said. “The biggest thing being that when something goes wrong in your life, it doesn’t finish you.”

Indeed, Southgate is credited with revolutionizing the way England prepares for and takes penalties, with a place in the 2018 World Cup quarterfinal to show for it.

Compassionate, trailblazer, sensible, thorough, brave, empathetic, gentle, strong – all words I’ve heard used to describe the England manager this week. Characteristics no doubt shaped by the acute failure he must have felt when he dashed England’s trophy dreams in 1996.

Our failures can form the roots of our successes if we’re prepared to reflect, learn and try again.

2. Stop handing out whinge vouchers After two years of work on a big project and having lined up a major financial services company to partner with us on it, they walked away, and the project fell apart. I was heartbroken. I had put so much work into it and was left with nothing. With my hope destroyed, I noticed my language in the office had become more and more negative. I’d sit there whingeing about what was happening, and it was like I was handing out invisible whinge vouchers to my colleagues (and family) for them to spend, and we’d all sit there whinging about it. But the whinge vouchers weren’t serving us well. They weren’t buying what we needed: a new project partner. In fact, they were stopping us from reflecting, learning and going again (see number 1!).

I realized that I had this abundant supply of free words that cost absolutely nothing to say, and I was spending them in the wrong way. I promised myself: no more whinge vouchers! Incidentally, soon after I started to use my free words more positively with colleagues and customers, we found a new project partner to fill the budget deficit. I don’t think it was a coincidence. When we dwell on our failures, either internally by mentally rehashing what we could have/should have done or externally by whingeing to our friends and family endlessly like some broken record, we prevent ourselves from getting to the all-important “go again” stage.

We can let our failures bring us down, or we can use them to start a fire in our bellies.

3. “How bad is it?” scale Let’s put things in perspective. How bad is it, really? During my solo Atlantic row, when there was a shark near the boat or waves the size of houses racing toward me, it seemed pretty dire. I devised a “How bad is it?” scale in my head from 1 to 10, to help me keep things in perspective. Ten was “you’re being eaten by a shark” (about the worst thing I could imagine happening!) and 1 was “you’ve made it across the Atlantic – wahoo.” On my worst days at sea I would ask myself this question and place myself on the scale. Even on my worst days at sea I never really went above a 7. I still use my “How bad is it?” scale every time I fail at something. Even on my worst days in the office I’m only ever at about a 4. We have a tendency to overreact. We spend so much time stressing about other people’s perceptions of us, but the reality is they’ve got their own business to worry about. They probably haven’t even noticed! Let’s keep things in perspective.

4. Burn it as fuel Finally, it’s worth remembering, as discussed in a previous blog about what we can learn from athletes, that we have two choices – we can let our failures bring us down, or we can use them to start a fire in our bellies. We always have the potential to burn them as fuel to make us more determined. Amen to that!

Debra Searle, MVO MBE, is a professional adventurer and serial entrepreneur. She has launched four companies, is a published author, has presented over 40 programmes for the BBC, is a trusted corporate and TEDx speaker, and was awarded an MBE from HRH The Queen.