Mega deals are making a comeback. Last year there were 26 transactions valued at US$4bn or more by PE funds or PE-backed companies. 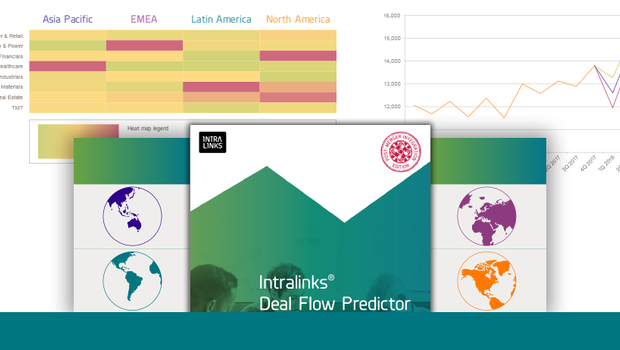 In the latest spotlight feature on private equity (PE) dealmaking in this quarter’s Intralinks Deal Flow Predictor, I highlight notable mega deals from 2017. These include Bain Capital’s US$10.6bn purchase of Toshiba’s memory chip unit in September 2017 and its US$5.9bn acquisition of German pharmaceutical company STADA Arzneimittel after a bidding war in July 2017. Another was the sale of Flora Food Group, Unilever’s global spreads business, to PE giant KKR for €6.8bn in December 2017, which marked the second largest buyout in Europe since the financial crisis.

What’s fueling the resurgence? Analysts say that the biggest drivers of today’s mega deals are cheap debt and a robust fundraising environment. Another factor relates to the natural evolution of PE, which is becoming more institutionalized and widespread—the inventory of PE-backed companies exceeded 12,000 as of 2017. The institutionalization has resulted in many large firms being able to successfully raise billion-dollar-plus vehicles for PE. It’s also important to note that limited partners are growing larger in size and need to commit larger sums to maintain allocations—and consequently those sums are going to the larger fund vehicles.

Are dealmakers prepared? Due to the faults of the 2006/2007 boom, where some limited partners felt burned by rigged fee-sharing arrangements, it’s easy to wonder if the past will be repeated. The hope is that dealmakers will move with caution this time around. Bill Stoffel, private-equity leader at Ernst & Young LLP, told Private Equity News that he thinks this is possible. Stoffel noted that the 2.0 mega deals are backed by PE-firms with much deeper operational resources than their counterparts in 2006. “Many private equity buyers are factoring purchase price multiple contractions into their projections when preparing to acquire companies, something that wasn't as prevalent before the 2008 downturn.”

I’m interested to see if this trend will continue or if we’re just experiencing a temporary resurgence. With so much dry powder in the coffers of PE, it’s safe to say the appetite is there; but will there be enough mega deals to feed that appetite?

If you want to read more about trends in PE dealmaking, you can check out the spotlight feature here.