We surveyed dealmakers in the region about the impact of COVID-19, recovery and the road ahead.

SS&C Intralinks surveyed 47 clients — largely advisors and investment bankers across all levels of seniority — throughout Australia and New Zealand in May 2020 to gain insight into local sentiment in the mergers and acquisitions (M&A) market.

The levels of uncertainty have not improved from late Q1 2020 when the local market first felt the impacts of COVID-19, and many respondents were eager to share their thoughts with us. A summary of our findings from this survey, along with our perspective, is provided below.

Australian and New Zealand vs. the world

The consensus is one of “cautious optimism” that the ANZ region will see a faster and stronger recovery than many international counterparts, and that the Australian Stock Exchange could be a beneficiary of the effects of global liquidity. Said one survey respondent, “I think Australia and New Zealand are better placed than most due to geography and 'island nation' status. Domestic manufacturing, particularly in high-value commercial and industrial products, will increase. Cashed-up acquirers will begin to take advantage of these conditions to gain market share in the next three months through acquisitions and/or pricing power.”

Australia took a precautionary (vs. reactionary) approach to COVID-19. To respond to the health crisis the country established a national cabinet consisting of the prime minister and the premiers and chief ministers of all the states and territories. The prompt response to mitigate the virus from both a health and an economic standpoint was a strong hedge against the global fallout from COVID-19. The comparatively low infections per capita and demonstrated ability to weather storms (i.e., previous global market depressions such as the global financial crisis) with less impact than global counterparts contribute to this “feel-good factor.” In addition, we are already seeing our domestic deals pick up in terms of activity; the high volume of domestic deals is unique to Australia across the Asia-Pacific region. 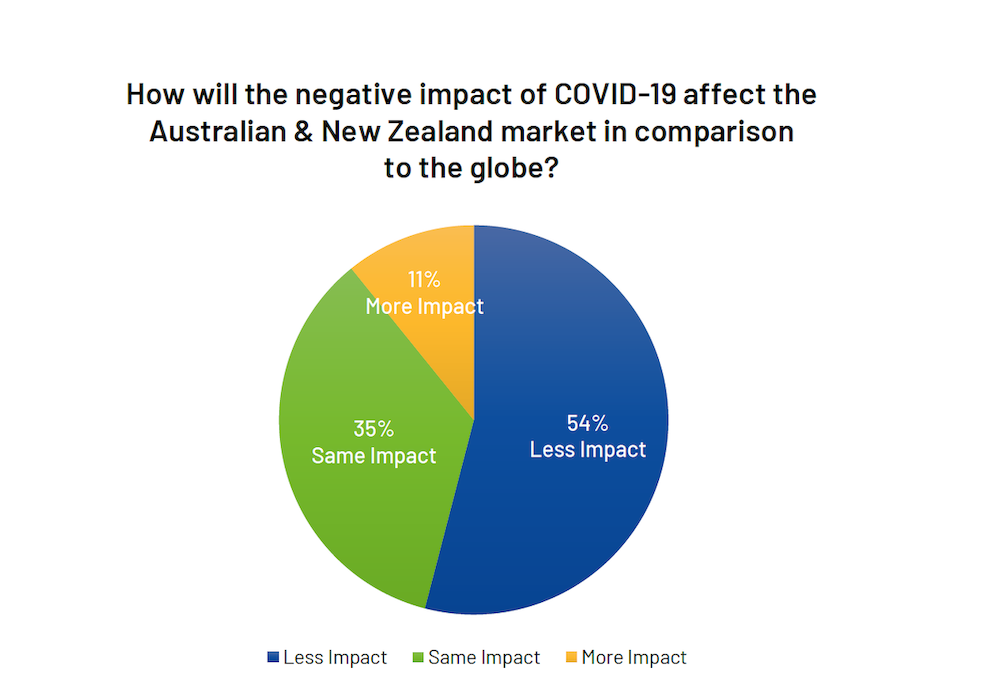 The road to recovery

I agree with the M&A recovery taking 12 months, with the injection of bankruptcy and restructuring deals expected to hit in the next 4-6 months.

The current state of play in M&A

Not surprisingly, the majority of deals in the market have been placed on hold. However, there is still a percentage that has seen no change which is a positive sign.

We have seen due diligence continuing for most deals that were launched pre-COVID-19, with the effect of the virus being seen on deals that were not yet in the market. Although many of these transactions have stalled or been put on hold, there have been relatively few that have been pulled completely. 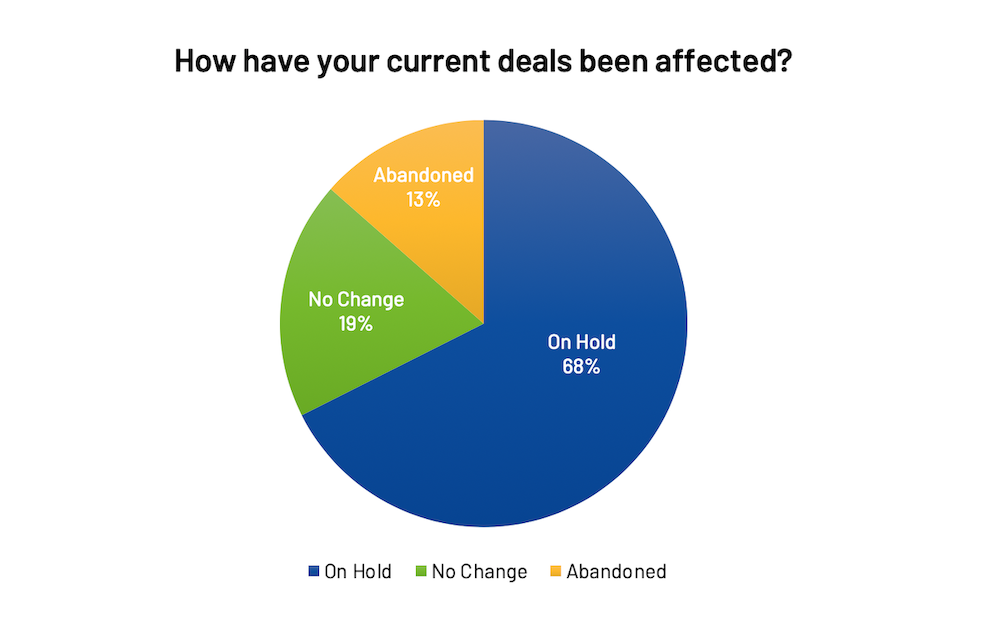 Opportunities in the post-COVID-19 market

Unfortunately, all signs point to more restructuring and insolvency activity once governmental stimulus packages and emergency refinancing dries up, especially if consumer behavior does not shift at the same pace as economic recovery. We did see some respondents’ positive outlook on debt advisory. We’ve seen the downfall of some industry behemoths, claimed as victims of COVID-19, and the writing’s on the wall: distressed private equity and other conglomerates are on the prowl for opportunistic deals now that valuations are discounted from early 2020 levels. 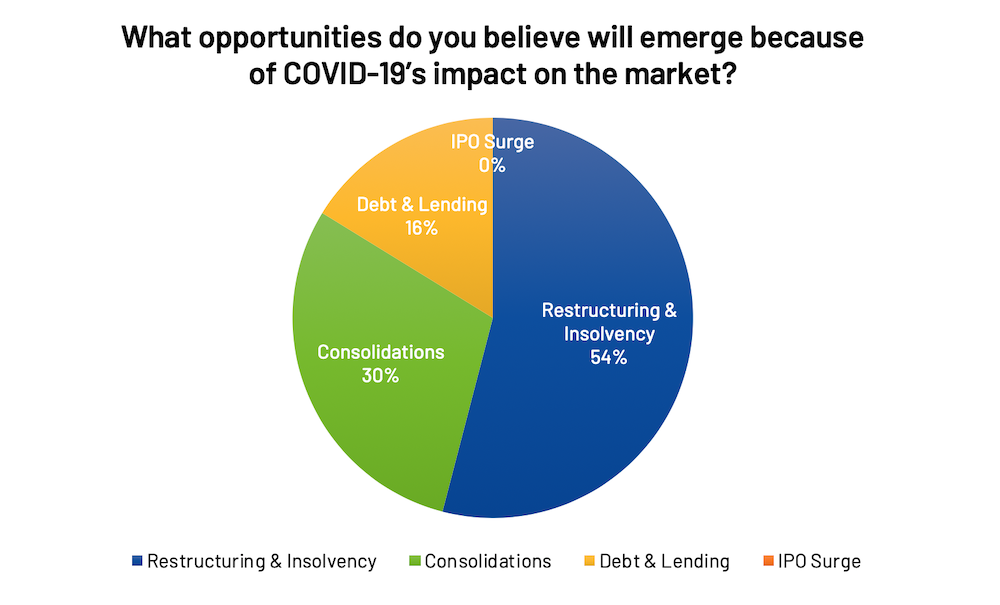 Challenges to many industries

While Hospitality is one of the most affected industries, the effects are more short-term than expected as restrictions begin to lift, whereas Tourism will continue to be affected as all travel is restricted for the foreseeable future. We have, however, seen an uptick in early-stage resource and resources services M&A activity with potential for opportunistic deals created by further volatility brought on by falling oil prices. 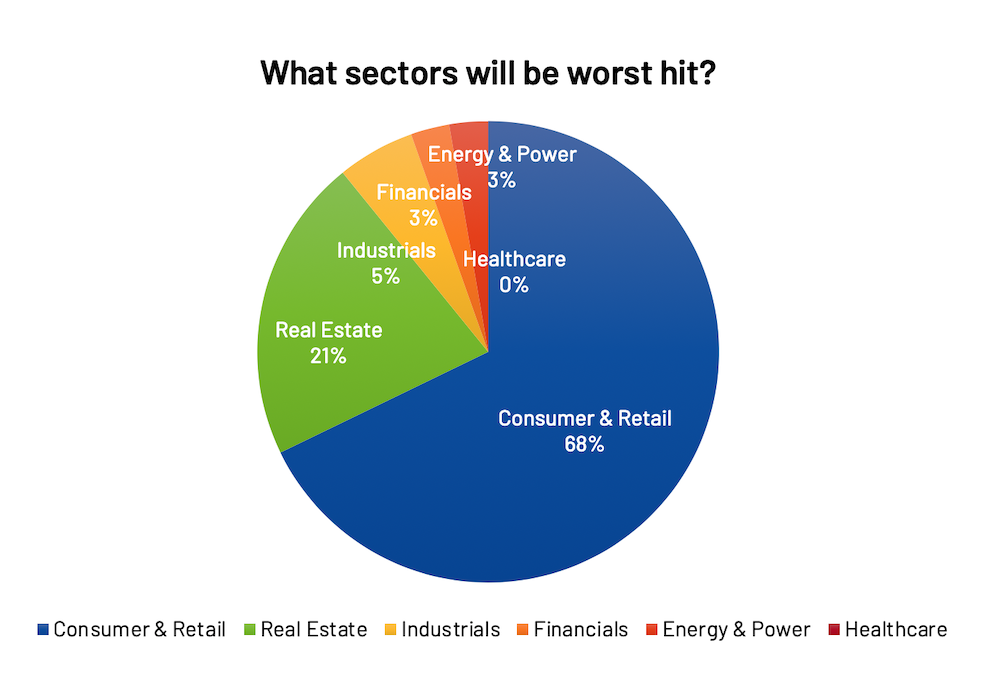 It’s very much business as [un]usual now and for the foreseeable future. Markets haven’t seen anything quite as inexplicable as what we’re seeing now with the fastest-ever ASX collapse, and uncertainty levels remain high, reflected in lack of activity in M&A markets. Consumer confidence levels took half a decade to recover from the previous global financial crisis, but from what we’re seeing in other parts of the world, there’s optimism for the future and liquidity is already flooding the markets.

The market suggests that some big swings in valuations are incoming — there may be an opportunity for buyers to shift focuses from highly-valued companies to distressed assets and increase their risk-adjusted returns.

Alex leads the sales, operations, go-to-market strategy and reporting in Asia Pacific (APAC). Alex joined Intralinks in 2015 and is an experienced leader with a background in computer software, SaaS and secure document exchange.