Perspectives on dealmaking from an annual panel presented by the City University of London’s Mergers & Acquisitions Research Centre at the Business School (formerly Cass). 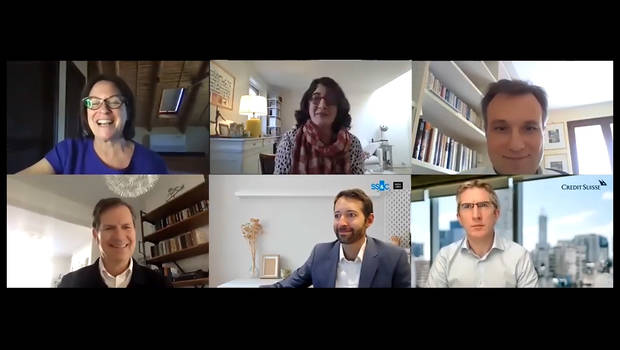 On January 25, I had the honor of joining a panel of impressive speakers at the 11th annual Outlook for M&A, an event presented by the City University of London’s Mergers & Acquisitions Research Centre (MARC) at the Business School (formerly Cass). SS&C Intralinks has a long-standing relationship with the school, and we’ve collaborated on a wealth of research projects such as Abandoned Acquisitions, M&A Deal Leaks and Gender Diversity and M&A Outcomes.

In pre-pandemic times the yearly gathering is a sold-out, in-person event held at MARC’s auditorium. Nonetheless, the virtual event didn’t hamper an excellent exchange of ideas on what happened in the global M&A market in 2020 and where it will go in 2021.

After an introduction from the Director of MARC, Professor Scott Moeller, Chair of the MARC Susan Kilsby – her tenth session as moderator — began an engaging conversation with my fellow panelists Giovanni Amodeo, chief research officer at Acuris, Cathal Deasy, head of M&A for EMEA at Credit Suisse and Lina Saigol, head of corporate news, EMEA, Barron’s.

For the next 45 minutes, we reflected on M&A’s strong start in 2020, the “massive pause” (as Giovanni described it) on deals triggered by the global COVID-19 pandemic and how the market strongly rebounded in the second half of 2020.

From his vantage point at Credit Suisse, Cathal exuded optimism. He said the pandemic has accelerated broader trends within the industry, namely digitalization, and has challenged corporates to examine existing business models. Another silver lining he pointed out is the strategic challenges the past year have presented corporate boards. In his estimation, most have done well to capitalize on their valuations and share price. He believes firms who aren’t in the same position of strength should think about consolidation as M&A remains a powerful tool.

I concurred with Cathal’s comments and spoke to the surge of transactions we’re seeing staged on our platform as described in the Q1 2021 SS&C Intralinks Deal Flow Predictor. Early-stage dealmaking — deals that are three to six months from announcement — are plentiful. We’re predicting deal volume to rise 18% led by an influx of transactions in financial services, tech, healthcare and restructuring in commercial real estate, oil and gas and retail.

The lively conversation touched on a host of pertinent topics: the rise of Special Purchase Acquisition Company (SPAC) IPOs and whether they’re good or bad for M&A; how activism will affect deals in the coming 12 months; and the effect of protectionism on cross-border transactions.

Overall, the event provided actionable intelligence for dealmakers and a valuable opportunity for MARC students to learn about M&A from a panel of seasoned experts entrenched in the practice.

My thanks to the team at MARC for inviting me to join this engaging panel. You can watch the full video below.