SS&C Intralinks Global M&A Dealmakers Report 2022, produced in association with Mergermarket, reveals that Asia Pacific dealmakers are bullish about the year ahead.

The mergers and acquisitions (M&A) market in the Asia Pacific (APAC) region was impacted earlier by the pandemic than in other parts of the world but held up more robustly. By Q3 2020, the market had set a record quarterly high. This has continued into 2021, with the first nine months already outstripping every full year since 2015, with USD 892 billion invested across 3,802 deals.

As expected, China, the world's second-largest economy, was the number one contender, claiming 39.5 percent of this deal value, with Australia in a distant second place with a 17.6 percent share of invested capital.

Mirroring M&A elsewhere and riding high on the pandemic's accelerative effect on all things technology, Technology, Media and Telecom (TMT) led the charge with USD 237 billion in deal value. However, unlike other markets, this was almost equally matched by the Construction and Infrastructure sector, which claimed USD 154 billion of investment. Topping the table was the mega-merger between Sichuan Railway Investment Group and Sichuan Transportation Investment Group, carrying an eye-watering USD 111.5 billion valuation.

In the Tech space, the average deal size was significantly smaller, but there was no shortage of assets changing hands. The USD four billion purchase of Shanghai Moonton by ByteDance’s video games unit Nuverse put TikTok owner ByteDance in direct competition with Tencent, China’s largest video game company. For its part, Tencent had a USD 5.3 billion merger of Huya and DouYu, China's top two video game streaming sites, that were blocked in July in what could be a portent of things to come as anti-trust regulators in the country tighten their grip.

As revealed in our newly published Global M&A Dealmakers Report 2022, a survey of 300 global dealmakers produced in association with Mergermarket, APAC respondents are remarkably bullish: Thirty-five percent anticipate a significant increase in M&A activity over the next 12 months, more than their peers in other regions. That said, they expect to be involved in roughly the same number of deals as their counterparts, 64 percent saying they will undertake between one and three M&A transactions.

The largest share of APAC respondents (81 percent) expects to undertake middle-market deals (worth less than USD two billion), and 39 percent plan to execute large deals (worth between USD two billion and USD 10 billion). This places them ahead of their peers in Europe, the Middle East and Africa (EMEA, at 32 percent) but far behind North American dealmakers (57 percent).

APAC dealmakers also plan to mostly transact within their own region (Q4), with a notable emphasis on Australia & New Zealand, cited by 48 percent of respondents, ahead of the 42 percent who have an eye on the Chinese market over the next year. This differential may reflect a cooling sentiment for China, which is not only becoming a stricter regulatory environment but is showing signs of weakness in its Real Estate sector, stemming from but not isolated to Evergrande's debt woes.

The motivations of APAC dealmakers are fairly evenly balanced. Digital transformation ranks highly, as it does in other parts of the world, with 14 percent of the vote. Technology has lowered the barriers to entry for start-ups in recent years, with different sectors coming under greater disruption. But in many cases, these young companies lack the brand and human capital resources to scale, making them prime targets for industry incumbents. With the pandemic having dealt digitally-advanced companies an advantage, there is more impetus than ever for corporates to acquire assets that can speed up their own digital transformation and secure their futures.

However, the leading driver of M&A in APAC, cited by 16 percent, is pursuing diversification of products and services. The past 18 months have changed the rules and exposed both strengths and weaknesses in existing business models. This is putting pressure on companies transacting in the M&A market to remodel themselves for a post-COVID world.

On the risk side, the greatest threat to M&A activity, according to 30 percent of APAC respondents, is rising regulatory scrutiny, followed by higher corporate tax rates (21 percent). Companies in most parts of the world are conscious of potential corporate tax raids. It stands to reason that once economies have stabilized, governments will seek to increase their revenues to close budget deficits and reduce their public debt following colossal stimulus programs.

In China, this will be a secondary concern considering the actions the state has taken to rein in the private sector in 2021. Alibaba was fined USD 2.75 billion for allegedly abusing its market position, setting off a crackdown that has entangled sectors including Education and Tech, wiping billions off market caps and putting investors at a disadvantage. The country's big Tech players have had to contend with fines and blocked deals from antitrust authorities, making heightened regulatory oversight a major concern.

For almost two-thirds of APAC dealmakers, COVID-19 has led to a greater dealmaking appetite, with 46 percent reporting an increase and 20 percent reporting a significant increase. This makes them the most optimistic respondents in our survey.

It is not clear what the precise reason for this optimism is. Countries like China and Australia have pursued zero-COVID strategies, imposing strict lockdowns to slow infection rates. Despite this, M&A has been steaming ahead. It seems that whatever approach a government has taken, there is faith in a rebound driven by consumer and business confidence, which in turn has been buoyed by the success of vaccine rollouts and unprecedented government stimulus relief. 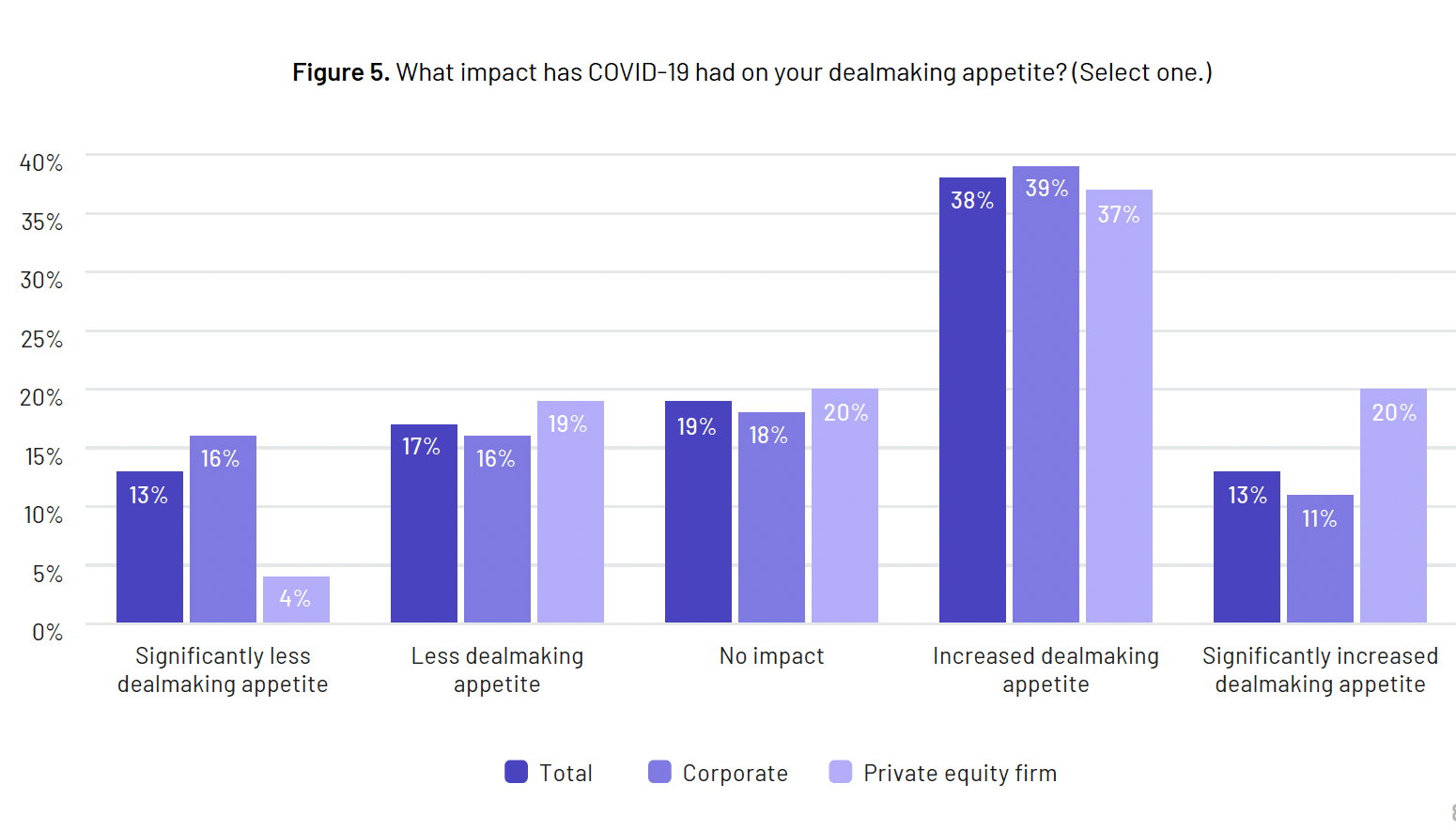 Nonetheless, APAC respondents are not blind to the challenges they may face in the aftermath of COVID-19, with 19 percent citing the difficult economic environment as their number one concern. This may be expected given the uncertainty that surrounds future growth, factoring in high short- to medium-term inflation and the loss of momentum that will come as the positive effects of stimulus payments wear off.

Views are mixed on the most prominent trends that will follow the current pandemic period. For 19 percent of the APAC survey sample, lower valuations are on the horizon. This may reflect markets finally digesting the liquidity pumped into them by governments and central banks, leading to an easing of price multiples. This would be a welcome development for buyers. However, 17 percent anticipate increased activity from PE firms, which are well equipped with capital and are competing heavily for quality deals, putting upward pressure on pricing.

Regarding environmental, social and corporate governance (ESG) regulation, sentiment in APAC almost exactly matches that of North America. There are expectations of greater obligations but not nearly to the same extent as in EMEA, where European policymakers are leading the charge. Forty-five percent of APAC respondents expect a moderate increase in scrutiny regarding ESG concerns and 29 percent foresee no change at all — a greater proportion than those who anticipate a significant increase in ESG regulations (19 percent).

Many Asian countries have made considerable efforts to improve ESG disclosures. Chinese regulators initially set a goal for mandatory disclosures for listed companies by the end of 2020, which was postponed to the end of 2021 due to the pandemic. Less developed markets are also making significant progress. For example, starting in 2023, the Philippines regulator will require publicly listed companies to submit sustainability reports, improving transparency for investors.

As it stands, that transparency is lacking. Most APAC respondents (27 percent) cite the lack or quality of sustainability data as the major challenge they face when making ESG-oriented investments. This mirrors responses to our survey from not only North America but also EMEA, the world's ESG frontrunner. This indicates that, while progress has been made, more could be done, including standardizing sustainability metrics to even the playing field and mandating non-financial reporting audits.

Notably, it is the 'G' in ESG that takes precedence in APAC compared with other parts of the world. Nearly half (44 percent) of respondents say that their primary ESG consideration is business ethics and transparency when weighing up investments, ahead of any other region.

As elsewhere, the number one factor that would compel APAC respondents to have a wider consideration of ESG matters are regulatory requirements (29 percent), followed closely by growing awareness in wider society (27 percent). This view is held in EMEA too, illustrating the influence a two-pronged effect of top-down policymaking and bottom-up consumer demand can have in shaping corporate conduct and M&A strategies.

Deals are being minted in abundance in APAC and market players are sanguine. There is much to be optimistic about as the global economy recovers and markets continue to advance. Of course, investors still have plenty of challenges to navigate as they seize on the many buying opportunities before them.

For APAC respondents, the biggest threat to completing a deal in 2021/22 will be protectionist policies and trade conflicts, referenced by 23 percent. Competition between countries for essential goods has intensified in the wake of the pandemic and amid ongoing supply-chain issues.

Against this still difficult geopolitical backdrop, the key focus for APAC dealmakers in our survey will be risk mitigation, cited by 18 percent, with managing the impact of geopolitical and regulatory risks being an important secondary area of attention (16 percent).

To get the full picture of what lies ahead for M&A in APAC and the rest of the world in 2022, download the SS&C Intralinks Global M&A Dealmakers Report 2022 here.

Ken Bisconti is a Co-Head of SS&C Intralinks. In this role, Mr. Bisconti is responsible for the end-to-end management of the organization along with Bob Petrocchi. He formerly served as Chief Product Officer for Intralinks where he developed a very deep and insightful understanding of market needs and strategic opportunities for Intralinks and put those insights to work defining the organization's product offerings.