A look at deal leaks through 2021’s banner year for mergers and acquisitions.

In the quest to negotiate the best deal possible within the world of mergers and acquisitions (M&A), it can sometimes be easy to forget how the leaking of information can have a significant impact on that deal’s outcome. In fact, leaks can often become a reason why some deals fail to get over the finish line, or in other cases make it over — and with a hefty premium to boot.

In their latest annual study on M&A deal leaks sponsored by SS&C Intralinks, the M&A Research Centre (MARC) of the Bayes Business School at City, University of London, analyzed 15,509 global deals sourced from SDC Platinum to try to understand where and in which industries most deal leaks tend to happen, and how that might or might not change within the global macro context. The deals analyzed had announcement dates that fell between January 1, 2009, to December 31, 2021, while the share and index price information were sourced from the Thomson Reuters DataStream database. To define a leaked deal, the Bayes researchers included M&A transactions with a publicly listed target company that had experienced a significant amount of pre-announcement trading activity.

Looking at deals in 2021 was a particularly compelling exercise, given the ongoing pandemic as a backdrop to what ended up becoming a banner year for M&A. Interestingly, what the Bayes researchers found was that M&A deal leaks in 2021 remained at broadly the same levels as in 2020: 8.8 percent of all deals announced during 2021 involved a leak compared to 8.2 percent during 2020. These were both above the 7.8 percent average for all years dating back to 2009.

However, it was by region that some differences began to emerge. In EMEA and APAC, deal leaks increased in 2021 compared to 2020 (by 2.9 percent and 2.1 percent, respectively), while the Americas saw a drop by 2.5 percent over the same period. This was particularly noteworthy given that the Americas comprised just a little more than 50 percent of 2021’s total deal value globally, while APAC accounted for 22.1 percent and EMEA 27.4 percent, according to Refinitiv data. By deal count, all three regions were more or less comparable in terms of market share, with the Americas responsible for 32.6 percent of global deal count, APAC 33.4 percent, and EMEA 34 percent. 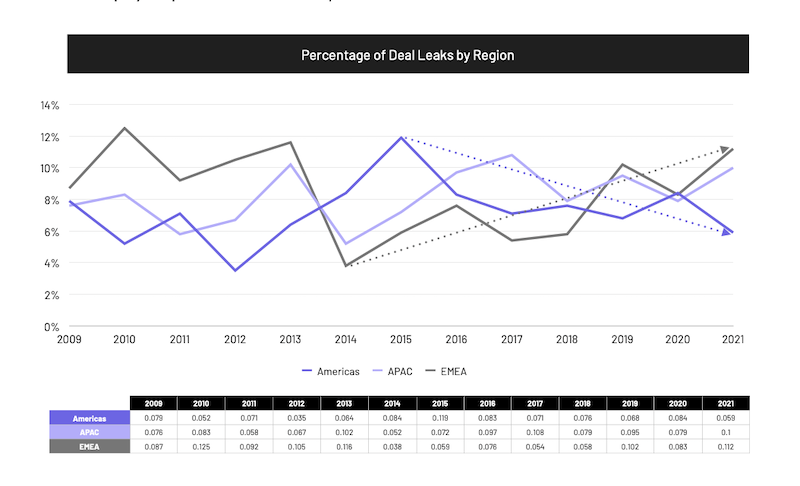 By sector, the three areas that saw the highest amount of pre-announcement abnormal trading activity in 2021 vs. 2020 were Healthcare (12.5 percent), Retail (11.9 percent) and Industrials (11.3 percent). Notably, none of these included the sectors that had been the "leakiest" when looking at the average of the last several years, which were Real Estate, Consumer, and Technology Media and Telecom (TMT). Also worth noting is that none of the report’s official “leakiest” sectors correlated with 2021’s top sectors overall for M&A, which according to Refinitiv data were Technology, Energy and Power and Financials. However, when considering the last few years’ average, Technology/TMT did have some overlap. 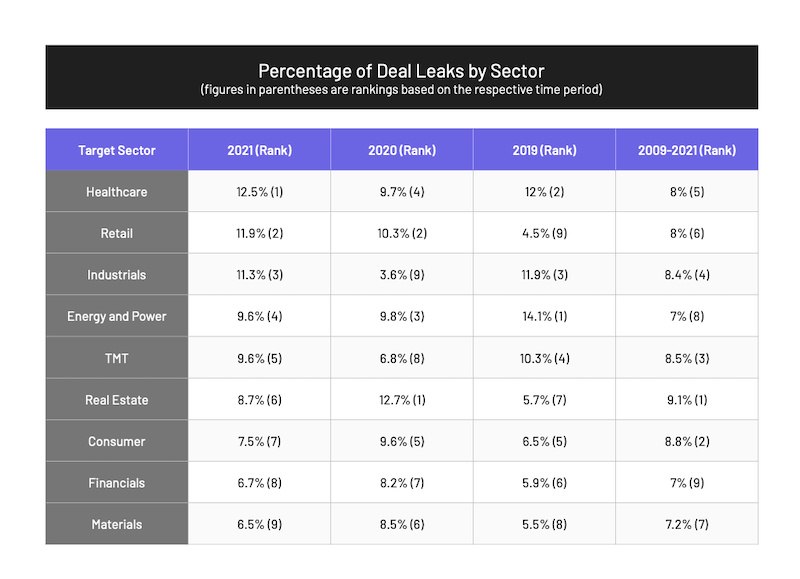 According to Dr. Valeriya Vitkova, one of the study’s authors, Healthcare, Retail and Industrials are three sectors that faced significant opportunities and challenges during the COVID-19 pandemic.

For example, she notes that in the Healthcare sector, pre-pandemic the focus had been on consolidation among big pharma, while the pandemic stimulated the focus of prospective buyers on medical suppliers, biotech firms and contract research organizations. She further remarks that in the retail space, meanwhile, the focus on e-commerce, digitalization, as well as health and wellness products was reinforced by the pandemic. And in the Industrials sector, acquirers started to increasingly look not only for targets with exposure to e-commerce, but also targets that can help strengthen supply chains and reduce input costs through economies of scale.

The increased interest from bidders as well as the increased activity in these sectors may have tempted sellers to utilize leaks to speed up transaction closing times, increase the likelihood of deal completion and increase offer premiums. Even the threat that a deal leak could attract competing offers may be sufficient to convince buyers to offer a higher premium or work harder toward closing the deal sooner.

Thus, while the leaking of a deal is at times unintentional, many times it can be strategic, resulting in changes in valuations, the commencement of a bidding war, or another process that can alter the deal somehow before it closes.

Indeed, perhaps one of the most interesting details to emerge from the Bayes researchers’ findings was related to the resulting takeover premiums for target companies involved in leaked deals, as alluded to earlier by Dr. Vitkova. In 2021, the median such premium was a staggering 54.3 percent, nearly twice that of non-leaked deals, which was 27.7 percent. According to the researchers, the difference in premiums translated into a median gain of USD 41.6 million in targets for deals involving leaks in 2021 compared to targets in non-leaked deals.

What this implies is that, according to the data, there appears to be an incentive on the part of sell-side parties to leak a deal, as the payoff for them looks to be potentially quite substantial. This is certainly less good news for acquiror companies, who could see the price tags of desired targets increase significantly. Therefore, there is also an incentive on the part of the acquiring party to prevent deal leaks as much as possible.

With regard to the time to completion, the Bayes researchers also found that leaked deals took less time to complete (a median of approximately 92 days) compared to deals without a leak (with a median of about 100 days). As with the aforementioned point, acquirer companies may find it necessary to close a deal more quickly once it is leaked to avoid attracting additional buyers and entering into a bidding war — or prolonging an existing one.

As for what governments can do to try to address the extent of deal leaks within their borders, Dr. Vitkova says, “While the global trend in M&A leaks has remained relatively stable over the last couple of years, the regional changes in the proportion of leaked deals observed in our study may be of particular interest to regulatory bodies. We see a drop in M&A leaks in the Americas region; however, our analysis shows that EMEA has experienced an increase and APAC remains at a relatively higher level of deal leaks compared to previous years. Given that it is unlikely that all deal leaks are unintentional, our findings suggest that regulatory measures and market monitoring may need to be strengthened in the latter regions in order to minimize the degree of market misconduct."

All in all, while 2021 may have been an anomaly year for M&A in general, in terms of deal leaks it seems that the levels seen in 2021 did not differ too remarkably from 2020, despite a considerable jump in both the number of deals and deal values on the whole. Overall regional M&A dominance did not have as much of an impact on where the most deal leaks took place. Where some differentiation did become notable was by sector, although these same sectors did not necessarily correlate with wider market trends. Thus, the business cycle was not as much of a factor in deal leaks as were regulations and individual sector dynamics. Ultimately, strong incentives to leak deals continue to exist on the seller's part, and it will be up to acquirers and governments to provide the necessary parameters to try to minimize them in the future.

Sectors With The Most M&A Deal Leaks In 2021