After the world has experienced a year as unusual as 2020 was, the status quo can seem quite surprising. But according to a study conducted by SS&C Intralinks and the M&A Research Centre (MARC), Bayes Business School (formerly Cass), the percentage of global M&A deal leaks changed relatively little from 2019-2020 — despite the shadow of the 2020 COVID-19 pandemic.

The MARC team defined a “leaked deal” as one that is public and had experienced significant pre-announcement trading activity. The research team sourced deal reports from SDC Platinum, and the share and index price data were sourced from the Thomson Reuters DataStream Database. Between January 1, 2009 and December 31, 2020, 14,288 deals were downloaded. The final sample consisted of 10,359 bids.

It’s important to note that while leaks may be unintentional, they’re sometimes done purposefully (and illegally) to start a bidding war or with the goal of altering a company’s valuation. No matter how they occur, they can affect a transaction in many ways and dramatically impact the reputations of all parties involved.

“The fact that a significant part of the dealmaking process had to take place virtually in 2020 probably helped firms ensure that leaks were avoided when this was critical,” notes Dr. Valeriya Vitkova, a research fellow at the M&A Research Centre and one of the study’s authors.

“Given the fact that total deal volumes and values remained stable in the first and even second quarters of 2020 and, in fact, significantly grew throughout the second half of 2020 and early 2021, I don’t think that this finding is surprising,” she explains. “Net-net, there was not much disruption in the M&A markets in general and as a result, we would expect that there will not be any disruptions in the incidence of deal leaks.”

Value of leaks on the decline

Places where the MARC authors did find notable changes, however, were in the dollar volumes of leaked deals. Total values were down 50 percent in 2020 compared with 2019 figures: USD 69 billion versus USD 139 billion from the prior year. The average dollar value of leaked deals also fell by 44 percent; from USD 1.8 billion in 2019 to USD 1.1 billion in 2020. According to Dr. Vitkova, this might suggest that acquirers and targets were particularly cautious about information leaks when larger transactions were involved.

“Being extra careful in situations where the stakes are high makes sense and firms were perhaps less concerned about information leaks involving smaller and probably less consequential transactions,” she says. “Also, these larger deals are the ones where there is greater external scrutiny, especially from the regulators as they expand their attention to more deals.”

The study also found significant regional variation around pre-announcement abnormal trading. The Americas experienced a 1.6 percent year-on-year increase in 2020. This stood in contrast with Europe, the Middle East and Africa (EMEA) and Asia Pacific (APAC) regions, which saw drops in deal leaks of 1.9 and 1.6 percentage points, respectively. Dr. Vitkova believes that the intense political activity that hit the U.S. last year — and the impact that it had on the stock market — may have driven up the number of North American leaks.

“Market volatility provides opportunities for leaks, and insider trading can be a part of this process,” she points out. “Opportunistic traders may have felt that this is a ‘safer’ environment to engage in insider trading since it is more challenging for regulatory bodies to detect trades based on information leaks and private information when you have increased market volatility in general.”

And the leakiest countries of 2020 are…

Despite the lift in leaks in the Americas, the world’s hotspots weren’t the leakiest. Instead, the three countries with the highest leaked deal activity were South Korea (12.5 percent), India (11.9 percent) and Hong Kong (10.3 percent). 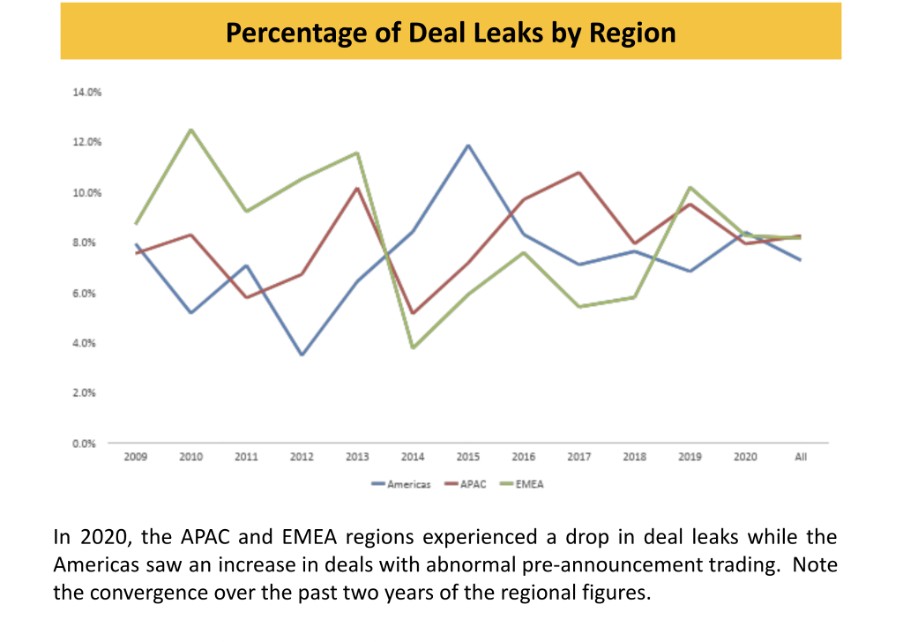 Asked why these three countries/regions were found to be atop the list, Dr. Vitkova explains: “When we look at the entire period since 2009 — when our first leaks report was published — we see that these three countries have traditionally been among the top in terms of deal leaks. That said, a high level of perceived or even actual insider trading is a factor in regulators ‘getting tougher’ as we saw about a decade ago in the U.K., which had had a much higher level of ‘leakiness’ than [they do] currently.”

These findings indicate that deal leaks will continue to pervade the market well into the future. “Leaking has been very attractive during the last few years, at least from the point of view of the target firm,” explains Dr. Vitkova.

From a buyer’s perspective, however, this is bad news, as leaks appear to drive up transaction costs. Acquisition targets may be tempted to intentionally leak information to boost premiums. Acquirers should remain extra cautious that no information is released to the market ahead of time.

“I think that if the current trajectory of booming M&A markets continues; we may see a higher incidence of deal leaks in the coming years,” adds Dr. Vitkova. “I look forward to seeing what happens with the trend of deal leaks in 2021.”