London, UK – 22 June, 2017: Leaking information on mergers and acquisitions (M&A) deals before any public announcement of the transaction added an extra US$21m to the average value of deals announced in 2016 that leaked, according to new research from Intralinks, a business of Synchronoss Technologies, Inc. (NASDAQ: SNCR), and Cass Business School, City, University of London.

In addition to evidence of higher valuations for M&A deals that leak, the 2017 Intralinks Annual M&A Leaks Report, published today, found that 8.6% of worldwide M&A deals were leaked in 2016. This figure is unchanged from the previous year (2015) and above a six-year low of 6% in 2014. In 2014, worldwide deal leaks had been on a declining trend for the previous six years, but this trend reversed in 2015 and 2016 – despite the efforts of financial regulators globally in recent years to bring in new regulations to curb deal leaks, and increase enforcement actions and fines for market abuse and insider trading. 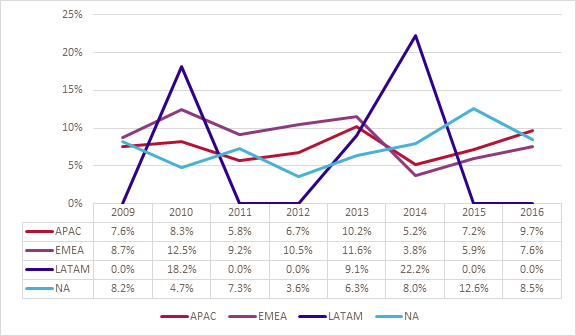 Why do M&A deals leak?

As our report shows, there appears to be one clear perceived benefit of leaking deals: higher target takeover premiums resulting in higher valuations, as a result of increased competition among acquirers for targets in leaked deals. This has been true in each of the eight years analyzed for this report: from 2009-2016, the median takeover premium for leaked deals was 47 percent vs. 27 percent for non-leaked deals, a difference of 20 percentage points. To quantify this, in 2016 the difference in the median target takeover premium for leaked deals compared to non-leaked deals was US$21 million, i.e., an average of an extra US$21 million accrued to the shareholders of the targets in deals that leaked.

These results could point to one other perceived benefit of leaking a deal – it potentially leads to a better match between acquirer and target. Leaking a deal may flush out the “optimal” acquirer, i.e. the one who has the greatest synergies with the target (and who can therefore pay the highest price, hence the higher target takeover premiums for leaked deals) and therefore also the acquirer who has the greatest incentive to complete the deal.

The influence of regulatory enforcement against deal leaks

In 2016, the US Securities and Exchange Commission (SEC) brought a record 548 standalone or independent enforcement actions, obtaining judgements and orders totalling more than US$4 billion in disgorgement and penalties1. The SEC also charged 78 parties with insider trading in 2016, compared to 87 parties in 20152. As our report shows, the rate of deal leaks in the US dropped from 12.6% in 2015 to 9.8% in 2016, which may be a result of the SEC’s enforcement strategy.

Elsewhere, fines issued by the UK’s Financial Conduct Authority (FCA) were the lowest since the financial crisis, down by 98% from £905 million in 2015 to £22m in 2016.3 But according to the FCA’s own data, it opened a record number of insider trading cases in 2016.4 Hong Kong, which recorded the second highest average percentage of deal leaks from 2009 to 2016, dropped to fourth place in 2016 with its lowest level of deal leaks (10%) since 2012. In its annual report for 2015-2016, Hong Kong’s Securities and Futures Commission (SFC) detailed 107 criminal charges against 15 individuals and five corporations. Total investigations rose by 12% and the number of investigations for insider trading grew by 20% from the previous year5.

So, with the perceived benefits of leaking deals reducing in 2016, and regulatory enforcement against market abuse continuing to increase, could the appeal of deal leaks be waning?

Philip Whitchelo, Vice President of Strategy and Product Marketing at Intralinks, a business of Synchronoss Technologies, comments on the findings: “The rate of deal leaks in markets where leaking was rampant a decade ago, such as the UK, has reduced considerably: a reflection of new regulations against market abuse and much stricter regulatory enforcement. Countries such as India and Hong Kong, which have comparatively high levels of deal leaks, are also making more efforts to tackle market abuse and insider trading. Overall, against the perceived benefits, those leaking deals must also weigh the risks, and those benefits appear to have reduced in 2016.”

Professor Scott Moeller, Director of the M&A Research Centre at Cass Business School also comments: “There will always be reasons why a target company may see a benefit to leaking a deal, and it is therefore unlikely that the level of deal leakage will ever be at - or near - zero.  However, it is encouraging to see that the percentage of deals that leak is remaining largely flat, and at levels below where it was a decade ago.”

Cass Business School, which is part of City, University of London, is a leading global business school driven by world-class knowledge, innovative education and a vibrant community. Located in the heart of one of the world's leading financial centres, Cass has strong links to both the City of London and the thriving entrepreneurial hub of Tech City. It is among the global elite of business schools that hold the gold standard of triple-crown accreditation from the Association to Advance Collegiate Schools of Business (AACSB), the Association of MBAs (AMBA) and the European Quality Improvement System (EQUIS).

In 1996, Intralinks, a business of Synchronoss Technologies, Inc. (NASDAQ: SNCR), pioneered the use of software-as-a-service solutions for business collaboration and transformed the way companies work, initially for the debt capital markets and M&A communities. Today, Intralinks empowers global companies to share content and collaborate with business partners without losing control over information. Through the Intralinks platform, companies, and third parties can securely share and collaborate on even the most sensitive documents – while maintaining compliance with policies that mitigate corporate and regulatory risk.

Over 4.1 million M&A, legal, corporate development and private equity professionals, investment banks, law firms and private equity firms have depended on Intralinks’ 20 years of experience in helping to facilitate transactions and business collaborations valued at more than US$31.3 trillion across all industries.

This document may include certain "forward-looking statements" within the meaning of the Private Securities Litigation Reform Act of 1995. These forward-looking statements include, but are not limited to, plans, objectives, expectations and intentions and other statements contained in this press release that are not historical facts and statements identified by words such as "expects," "anticipates," "intends," "plans," "believes," "seeks," "estimates," “outlook” or words of similar meanings. These statements are based on our current beliefs or expectations and are inherently subject to various risks and uncertainties, including those set forth under the caption "Risk Factors" in Synchronoss’ Annual Report on Form 10-K for the year ended December 31, 2016 and other documents filed with the U.S. Securities and Exchange Commission. Actual results may differ materially from these expectations due to changes in global political, economic, business, competitive, market and regulatory factors. Synchronoss does not undertake any obligation to update any forward-looking statements contained in this document as a result of new information, future events or otherwise.