After almost a year-long pandemic-driven delay, the Structured Finance Association (SFA) held its annual conference in Las Vegas from October 3–6. 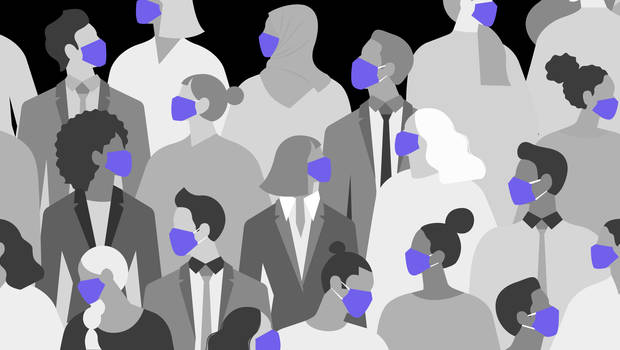 While the crowd was notably less than the 8,000 that attended the previous conference held in February 2020, there was much excitement in the (filtered) air at the event held at the ARIA Resort & Casino.

Along with the bankers, issuers, service providers, regulators and investors in attendance, the Intralinks team was thrilled to be in attendance at this in-person event — even if that meant dusting off our business clothes and awkwardly switching between handshakes/elbow-bumps/quick nods to greet our industry colleagues.

Since a lot of useful information was provided by an array of industry experts during the four-day conference, I thought it would be useful to share five key takeaways from the event with the Intralinks community. Here they are listed in no particular order.

Credit the quick, unprecedented government fiscal response to the COVID-19 crisis to the tune of USD 5.1 trillion in stimulus between March 2020 to March 2021. That amount is a whopping 24 percent of America’s GDP. When compared to the 2008-09 Global Financial Crisis (GFC), only USD 940 billion was pumped into the economy — only 6.5 percent of the GDP.

During “Lessons Learned from the Pandemic,” Rui Pereira, a managing director at Fitch, said that today’s economic rebound is possible because pre-COVID economic conditions were different than those pre-GFC. Financial institutions and regulations were much stronger, and consumers and housing were resilient because of the quality of underwriting and support. Pereira reported, “We’ve seen ratings downgrades, but they are concentrated in specific sectors, in sub-investment grade bonds. But, in general, ratings have held up very well — far better than [during the] GFC.”

But many challenges persist

Among the most important macro concerns are continued global supply-chain issues and related U.S.-China trade tensions. At “Macroeconomic Outlook from Geopolitical Risks, Pandemic and Economic Recovery,” Maj. Gen. James Marks, head of geopolitical strategy at Academy Securities, said these issues are “not going to self-correct as a result of the pandemic … [the U.S.] doesn’t have the political strength to resolve them.”

Dr. Jonathan Ward, of the Atlas Organization, said, “There is a battle for the world economy … [the U.S.-China trade war will cause] a massive change in geopolitics and could escalate to the scale of the first Cold War.”

Within structured finance, a few pockets have yet to recover, including conduit CMBS (more on that shortly), esoteric securities and the secondary market.

CMBS continues to be a mixed bag

At a CMBS market update, panelists talked about the nuances in the sector highlighted by the pandemic. For example, conduit deals continue to decline. Anuj Jain, an analyst at Barclays, attributed this to static cashflows, tight credit spreads, a wide delta between fixed and floating rates, and borrowers not wanting to lock in the current rates for multiple years. Furthermore, because hotel and retail properties are struggling, there is not enough supply of those loans to contribute to and diversify a conduit CMBS.

According to Leland Bunch, a managing director at Bank of America, “Putting those assets into conduit pools just creates noise. It’s a distraction most people don’t want to deal with.”

Meanwhile, issuance of single-asset, single-borrower (SASB) and CRE CLOs keeps surging. In fact, several blockbuster SASB deals were announced shortly before the session: a USD 3.15 billion deal involving the conference venue, the ARIA and a USD 1.8 billion deal to refinance properties owned by Anbang Strategic Hotels and Resorts. The panel expects SASB to expand beyond 40–50 percent of the CMBS product mix and CRE CLOs to keep growing as there are no shortage of multifamily deals. Future volume will be dictated by the pace of business travel and the future of the workplace, as well as regulatory unknowns.

Office space remains a big question mark. Since leases tend to be for long periods, and there are many tax incentives for companies, this sector could fare better than Retail in the long run. Bunch pointed to the fact that Facebook and Google spent more money on real estate in New York City in 2020 and 2021 despite instituting remote-work policies. Jain said demand could stabilize once the pandemic is over — still a decline from historic levels but not as bad as retail.

Financial equality is more important than ever

The pandemic amplified inequalities in access to financing and housing. At “How Securitization Can Help Build Financial Equality,” Armando Falcon, chairman and CEO of Falcon Capital Advisors, talked about the vast infrastructure that promotes homeownership — with government policies and initiatives including some dating back to the Great Depression. These include Ginnie Mae, Fannie Mae, the Fair Housing Act, the Fair Credit Reporting Act and various tax incentives. Despite these efforts, however, inequalities persist. Moderator Elen Callahan, managing director at SFA, said these “… government policies only offer a partial solution; this is where capital markets come in.” In addition to securitization, community development financial institutions (CDFIs) play a key role in facilitating more equitable access to, as well as affordability of housing to a broader swath of consumers.

The Biden administration seems intent on addressing these issues — and rightly so. According to Callahan, “Financial inclusion makes a society less fragile.”

For more insight on solving today’s problems, many are looking to alternative data. For example, Rui Pereira from Fitch talked about using insights from Google Mobility and OpenTable to help predict post-COVID recovery and supplement traditional analysis.

Unconventional data can also help on the road to more equitable access to financing, Dave Shellenberger, a VP at FICO, said that there are 50 million consumers who are credit “unscorable,” in other words, with not enough information to score. There was a suggestion of using a “sustainability” score which would consider payment on cable and cellphone bills, public record property data and other similar data. “This can help us cast a wider net and score more consumers.”

Furthermore, it shouldn’t be assumed that new borrowers or those with low scores will not be able to cover and manage their mortgage over the long run. Andrew Davidson, president at Andrew Davidson & Co., supported these sentiments: “Someone who is delinquent [on a loan] doesn’t mean they are a bad person. It means they faced a setback; it doesn’t mean they don’t deserve to own a home.”

The mood at the conference felt like a collective sigh of relief — many had expected a Great Depression-type outcome from COVID-19. Instead, it feels more like coming out of a natural disaster, where mostly labor markets are impacted but not the broader economy. There was also a strong sentiment that structured finance has played a key role in this recovery.

Ahead for the industry lies addressing the issues that the pandemic has accelerated — the challenges of retail properties, fostering sustainability in financing, U.S.-China trade and geopolitics as well as protecting against the next crisis. The industry might not be so lucky the next time around which means it might fall heavily on the structured finance industry and related participants to ensure that markets are sustainable for the long-term — crisis or no crisis.

Jordan Brown is an account executive on the banking and securities team at SS&C Intralinks. He helps clients securely share and collaborate on sensitive information throughout the various stages of the financing deal lifecycle. Prior to Intralinks, Jordan worked at Bain Capital, LP, where he managed the information flow of due diligence and facilitated the deal closings for capital-market and distressed debt transactions.